Why US Governors Should Beware of Russians Bearing Gifts 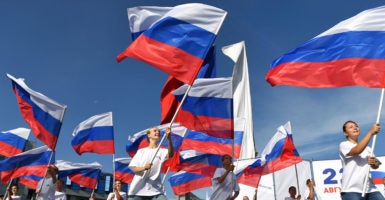 No matter how enticing the foreign investment might be for some states, they should be extremely cautious when dealing with Russian companies—especially those connected to the Kremlin. Pictured: A National Flag Day celebration in the Russian city of Novosibirsk. (Photo: Kirill Kukhmar/TASS/Getty Images)

Under the misleading guise of being a British company, a firm connected to a Russian oligarch is seeking to expand its investments and business dealings across the United States.

Only a few months after Russian oligarch Oleg Deripaska’s companies were scandalously removed from U.S. sanctions, they have wasted no time trying to enter the U.S. market.

No matter how enticing the foreign investment might be for some states, they should be extremely cautious when dealing with Russian companies—especially those connected to the Kremlin.

Anything linked to Deripaska should be a concern, as he is steeped in controversy.

A billionaire several times over, he enjoys close connections inside the Kremlin. While his companies were removed from sanctions, he personally remains listed. He has a long history of confrontation with American authorities. In the past decade, he was denied a business visa to the United States and was named a person of interest in the federal investigation into Russian meddling in U.S. elections.

Despite all that, in January, the Office of Foreign Assets Control decided to lift sanctions on two of his companies, aluminum giant Rusal and its parent company, En+ Group.

There was bipartisan shock within the U.S. foreign policy establishment. Several Republican senators, including Tom Cotton of Arkansas, Cory Gardner of Colorado, Marco Rubio of Florida, and Susan Collins of Maine expressed their displeasure with the decision.

Since the sanctions were lifted, Deripaska’s lackeys have wasted no time in seeking to expand business into the U.S.

It’s been reported that Rusal will invest in a $1.7 billion aluminum mill in Kentucky. It would have been unthinkable that during the Cold War a Soviet aluminum company would have been allowed to invest in the U.S. So how has that been able to happen today?

There are two main reasons.

First, it was a team of lawyers and lobbyists employed by Rusal and En+ Group that successfully persuaded the Office of Foreign Assets Control that Deripaska had relinquished control over those companies so they could be delisted.

“They use our laws, our rules, our banks, our lawyers, our lobbyists—it’s a strategy from within,” she said.

And it was successful. At the time the sanctions were lifted, Cotton remarked: “I don’t believe Deripaska will be denied operational control of these companies, and I therefore believe they should remain subject to sanctions.”

Second, Deripaska has been able to create an image of his Russian companies actually being respectable British entities. He hired former British minister and ex-Tory parliamentarian Greg Barker to serve as the chairman of En+ Group.

Before entering politics, Barker had a questionable history going back to the 1990s, working for Russian oligarchs, including Roman Abramovich.

When En+ Group was listed, amid controversy, on the London Stock Exchange in November 2017, Barker’s name gave a patina of respectability to investors.

Last April, Barker sent letters to eight state governors making the case as to how their states could benefit from Rusal’s investment. But nowhere does the letter even say that Rusal is Russian.

Russia continues to prop up Syrian strongman Bashar Assad and occupy huge chunks of Ukraine and Georgia. It has meddled in U.S. elections and surely plans to do so again in the future.

The idea that a major Russian aluminum company should be allowed to invest in America’s heartland is very concerning.

At the end of the day, as massive Russian companies with global interests, Rusal’s and En+ Group’s investments in the United States should come under intense scrutiny. After all, in the case of Rusal, the aluminum it produces has helped build the Russian war machine we are seeing in action in places like Ukraine and Syria.

U.S. governors need to enter into any deal with companies like Rusal with their eyes wide open, knowing who they are really dealing with—not some British lord, but a Russian oligarch intimately linked to Russian President Vladimir Putin himself.