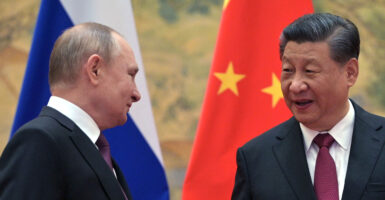 America is caught between an external and an internal threat.

The external is an economically aggressive and America-hating China and a nuclear-equipped, America-hating Russia; the internal is a non-nuclear, America-hating left. (As I always note, “left” is not the same as “liberal”; in fact, leftism poses a mortal threat to liberalism. The greatest contemporary tragedy in American life is that most liberals are unwilling to acknowledge this and continue to vote for the left.)

To use one of the left’s favorite terms, the left poses “an existential threat” to America. Russia, unless it starts a nuclear war, does not. I should add that I do not discount the latter possibility.

I was a high school freshman during the Cuban missile crisis, but I do not remember anyone my age or among my parents’ peers who thought the Cuban crisis would lead to nuclear war. I am less certain today. Russian President Vladimir Putin does not seem to be as rational as Nikita Khrushchev was, and Khrushchev had nowhere near the passion about Cuba that Putin has regarding Ukraine.

The left may hate Putin, but hatred of America unites the left and Putin. Again, this is not the case with liberals, most of whom love America.

To illustrate this point, take the example of Superman. It was liberals, in 1938, who created Superman, an America-loving, American values-affirming (“Truth, Justice, and the American Way”) superhero. And it was leftists who destroyed Superman as an American hero. In 2011, they ended his American identity: Standing in front of the United Nations, Superman announced that he was renouncing his American citizenship to become a “citizen of the world.”

Every left-wing movement in the world despises America—and for good reason. America has stood for everything the left opposes. It is the most capitalist, most religious, and most nationalistic major democracy. America’s unique success has been the greatest possible rebuke to left-wing ideology. America must therefore be brought down.

So, then, America finds itself today attacked by three anti-American forces: Putin and China externally and the American left internally.

If there is no nuclear war with Russia, by far the greatest of these threats emanates from the American left. It has successfully de-Americanized and ruined every major institution it has touched: nearly all educational institutions from elementary schools through universities; virtually all major mainstream news media; the intelligence agencies (51 heads of intelligence agencies declared revelations of Biden family corruption emanating from Hunter Biden’s abandoned laptop “Russian disinformation”); the economy (the worst inflation rate in nearly half a century is the result of the cavalier spending of trillions of dollars and the left’s energy policies, which, within a few months, transformed America from energy-exporting to energy-importing); and even medicine (the American Medical Association and more and more medical schools are fully “woke”).

The only way to save America from its internal existential threat is for liberals to understand that the threat to their core values emanates from the left, not the right.

Just to cite two examples, it is not the right that opposes liberalism’s commitment to free speech; it is the left that cancels people for saying anything the left differs with—including stating obvious scientific and moral truths, such as that it is unfair to women to allow biological males to compete in women’s sports.

And it’s not the right that opposes liberalism’s commitment to racial integration; it is the left (holding the same position as the Ku Klux Klan) that calls for all-black dormitories on college campuses and all-black graduations.

Only America’s liberals, working in common cause with conservatives, can save America. Then America can deal with any threat—internal or external.