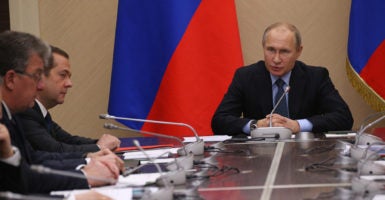 Russian President Vladimir Putin has paved the way for constitutional changes that would allow him to retain power after 2024, when his presidential term ends. (Photo: Mikhail Svetlov/Getty Images)

On Wednesday, Russian Prime Minister Dmitry Medvedev announced that he and his government were resigning to allow for new constitutional changes by President Vladimir Putin.

The announcement was completely unexpected, and yet the outlook for Russia’s future looks the way many have expected. Putin has been in power for 20 years and will probably continue to be for many years to come.

The announcement, made on state television, came soon after Putin proposed a nationwide vote to shift more power from the presidency to the parliament. But even though Medvedev is stepping down as prime minister, he isn’t going anywhere. Putin declared he would make him the new deputy head of Russia’s Security Council, a powerful body that shapes Putin’s decisions on national security.

As for Russia’s new prime minister, it’s a man most Russians have never even heard of: Mikhail Mishustin. The former chief of Russia’s tax service, Mishustin has kept a low political profile and doesn’t belong to any political party.

>>> Protests in Moscow Reveal a Disparity in Russian Democracy

Because he’s kept such a low profile, he may not seem to fit in with Putin’s cronies, but he does. He’s one of Russia’s wealthiest people, having been the third-richest Russian state official in 2009.

But Mishustin likely won’t pose a threat to Putin’s power hold since he has traditionally chosen to remain in the background.

>>> How Putin Uses Russian Orthodoxy to Grow His Empire

Since he is proposing new constitutional changes that would place more power into the hands of the parliament, Putin essentially would not be losing any of his power come 2024.

This is Putin’s strategy—to hold as much power as possible, for as long as possible. He’s been in power over Russia for more than 20 years now, and it’s not likely he will relinquish control.

Interestingly, on the day these changes occurred, Chechen leader Ramzan Kadyrov announced he was going to temporarily leave office because of “temporary incapacitation.” He placed Chechen Prime Minister Muslim Magomedovich Khuchiyev in charge but gave no further details about the change.

This also occurred last February for the same reason, according to Kadyrov.

The Chechen Republic, located in Russia’s North Caucasus region, is historically known for being unstable and troublesome to Moscow. But for the last decade or so, Kadyrov has kept the republic relatively stable, in spite of a number of human rights abuses, which Putin ignores since his priority is to keep Chechnya stable.

Putin remains popular among Russians, but this is because many don’t see another option for their nation’s leader. He appears to provide stability, despite an increasingly poor situation for the Russian people, since pensions and the standard of living continue to decrease.

>>> Russian Disinformation Is a Serious Threat to Europe. Here’s How to Counter It.

Mishustin is set to pick his new Cabinet soon. In the meantime, it will be business as usual since Putin remains president, and he has the ultimate say in Russia’s foreseeable future.

Thus, the recent apparent “upheaval” of Russia’s government is really no upheaval at all.