Poland Is Key to a Safe Europe, and Putin Knows It 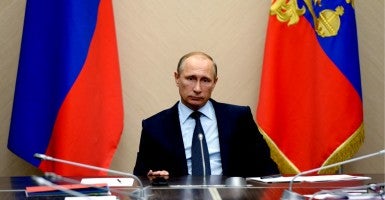 Good news in Eastern Europe is hard to come by these days with Russian President Vladimir Putin playing the bully in Ukraine and elsewhere, along with tens of thousands of fleeing Syrians and other Muslims seeking refuge in Europe.

But I can report that an organization of young conservative Poles, committed to economic freedom and a robust civil society, is working tirelessly to transform ideas into action, much as the conservative Young Americans for Freedom did in the United States in the 1960s and 1970s through its support of limited government and free enterprise and political leaders like Barry Goldwater and Ronald Reagan.

These young Poles call themselves Students for the Republic of Poland.

Although only five years old, they have branches in the major colleges and universities of Poland’s largest cities such as Warsaw, Krakow and Wroclaw. Founded by Pawel Kurtyka, a brilliant young action intellectual, the students have already made a difference through their support of public causes like the “Doomed Soldiers Memorial Day” and recognition of the anti-Nazi, anti-Communist heroism of Witold Pilecki,

The”Doomed Soldiers” comprised an underground resistance movement that fought communism in Poland until 1961, a decade and a half after the Iron Curtain came crashing down and cut off Eastern Europe.

Witold Pilecki won medals for battlefield bravery in two world wars and the Warsaw Uprising of 1944. He is best known for volunteering to be sent to Auschwitz, the Nazi death camp, so as to gather intelligence about its horrific crimes. Incredibly he escaped after two-and-a-half years and published his findings.

Joining the underground resistance after World War II, he was captured and executed by the Polish communist government in 1948 for “foreign imperialism”—i.e., resisting communism.

The example of Polish patriots like Pilecki inspires the leaders and members of Students for the Republic of Poland who are willing to take on critical issues like the need for a firm foreign policy toward Russia, the future of Social Security, and what is the role of the mass media in civil society?

I was in Opole, about three hours by train from Warsaw, where I gave a lecture about U.S.-Eastern Europe relations, with an emphasis on Poland. I truly believe that just as Germany is the key country, politically, economically, and strategically, in Western Europe, so Poland is the key country in Eastern (and Central) Europe.

By reason of its size and population (some 38.5 million), its strong economy (its GDP grew 2 percent in 2014 when the economy of almost every other European country was flat), and its border with Russia and Ukraine on the East and Germany and the Baltics on the West, Poland is the linchpin of security in Eastern Europe. Poland warrants U.S. assistance and support.

Drawing on the work of my Heritage colleague, Daniel Kochis, I suggested that the U.S. should:

To my amazement, we have not extended the same courtesy to Poland that we have to almost every East European country—the waiving of visas. Under present law, even President Andrzej Duda of Poland must fill out a form that asks, “Have you ever advocated the violent overthrow of your government?” Of course, the president would have to answer “yes” since he supported the overthrow of the former communist government. Would we then deny him a visa? Hopefully not, but the exclusion of Poland from the visa waiver program should be promptly reversed.

I also recommended that the U.S. lift current oil export restrictions so that the U.S. can export natural gas and oil to Poland, significantly reducing its energy dependence on Russia that presently supplies 60 percent of Poland’s natural gas.

I reminded my young conservative Polish audience of what Pope John Paul II had said on his first pontifical visit to Poland in 1979, a visit that laid the foundation for the creation of the Solidarity trade movement and set in motion forces resulting in the collapse of communism in Eastern Europe a decade later.

You must be strong, dear brothers and sisters… with the strength of faith.

You must be strong with the strength of hope.

You must be strong with love, which is stronger than death.

There is therefore no need to fear.

To the young men and women who will be the leaders of Poland tomorrow (maybe even sooner), I want to reiterate for them to go forward trusting in God and to remember the words of John Paul II: