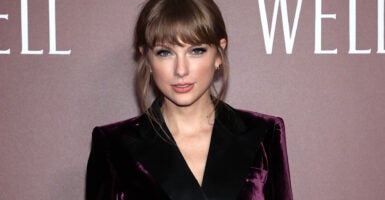 Taylor Swift’s new album “Red (Taylor’s Version)” may have made Swift into a brand of her own. Pictured: Swift attends the short-film premiere of the song "All Too Well" in New York City on Nov. 12. (Photo: Dimitrios Kambouris/Getty Images)

Pop singer Taylor Swift is shaking up the music industry with her rerecorded version of “Red (Taylor’s Version).” The 11-time Grammy award-winning artist is rerecording her music in order to own the rights to her songs. Shamrock Capital Advisors, an investment firm in Los Angeles, currently owns the rights to Swift’s original albums.

The original “Red” album was first released in 2012 and features hits such as “22” and “I Knew You Were Trouble.” Re-creating her music is somewhat of a novel idea and has fans wondering whether other artists will follow Swift’s lead and rerecord their own music for the sake of ownership rights.

Swift rerecorded her 2008 album “Love Story” with songs like “Forever & Always” earlier this year. The singer-songwriter plans to re-create all six of her original records.

Swift’s actions are creating new competition within the music industry. iHeartRadio, the largest radio network in the U.S., announced that when “Taylor re-records a new track, we immediately replace the old versions.”

On today’s edition of “Problematic Women,” we break down the significance of Swift’s decision to rerecord her music, and the singer’s influence on the music industry.

Also on today’s show, we discuss the significance of the Kyle Rittenhouse trial and what the outcome could mean for the people of Kenosha, Wisconsin. Plus, we get you ready for Thanksgiving with a few fun holiday cooking tips. And as always, we’ll be crowning our “Problematic Woman of the Week.”