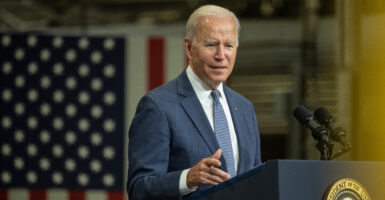 President Joe Biden, seen here Oct. 25 speaking at the New Jersey Transit Meadowlands maintenance complex, is restoring Obama-era Title IX policies regarding cases of sexual assault on college campuses that often denied the accused the right to counsel, the right to see the evidence against him or her, and the right to present exculpatory evidence. (Photo: Andrew Caballero-Reynolds/AFP/Getty Images)

In economics, there’s a thought experiment called the “prisoners’ dilemma” that describes a scenario in which two rational people fail to reach a win-win outcome by cooperating.

Neither person can trust the other to cooperate, and their distrust leads them to pick an outcome that’s bad for both.

The classic example features two conspirators questioned by police in connection with their crime. If they both stay silent, they’ll get off with light sentences. If they both confess, they’ll get medium sentences. But if one confesses and the other stays silent, the confessor goes free and the tight-lipped conspirator spends a long time in prison.

The best outcome is to cooperate and stay silent, but if the conspirators can’t trust that their partner will be silent, they’ll both confess, leading to a worse outcome.

The prisoners’ dilemma is a thought experiment for economics students, and it should stay that way. President Joe Biden, however, is trying to make it a reality on college campuses. His updated Title IX policy—which will govern sexual assault and harassment investigations on college campuses—will once again turn college romances into something better left in an economics textbook.

We say “again” because we’ve been here before under former President Barack Obama’s Title IX policy.

While Obama’s policies were still in effect, two college students at the University of Cincinnati got drunk and had a one-night stand. Because they were both drunk, under the college’s sexual assault rules, neither one could give consent, and both were guilty of sexual assault.

The next morning, the male student woke up first and, terrified that his partner would lodge a sexual assault complaint against him, rushed to the Title IX office, and filed one against her.

At that time, the school followed Obama administration guidelines that virtually guaranteed that every accusation led to punishment, no matter what the facts were. The result: The girl was found guilty of sexual assault and suspended.

This was a real-life prisoners’ dilemma, because the best outcome for both parties was to keep quiet about their fling, but Obama’s Title IX guidelines created an irresistible incentive to kiss and tell.

Obama’s Title IX policies directed colleges and universities to establish a low standard of proof in disciplinary hearings, cease live hearings and cross-examination, and punish accused students based on only their accusers’ testimony or even the testimony of a third party who saw nothing.

Under former President Donald Trump, Education Secretary Betsy DeVos revitalized Title IX policy by returning to a higher standard of proof, reinstating live hearings and cross-examination, and restoring a fairer campus justice system that did not deny the accused due process.

By restoring due process to campus sexual assault tribunals, Trump and DeVos eliminated the perverse incentives that created the prisoners’ dilemma at the University of Cincinnati.

Biden now seeks to restore Obama’s Title IX policies, which will eliminate due process rights and once again encourage half-naked students to race across the commons to be the first to file a sexual harassment charge against their erstwhile paramours.

Low due process protections encourage students to report one another, even when no assault occurs, out of self-preservation. Under the Obama/Biden rules, the accused is forbidden from mounting a defense and often banned from any part of the campus frequented by the accuser, while the accuser is afforded every protection that college administrators think a presumptive sexual assault survivor needs.

Obama and Biden’s Title IX policies lead to students being punished without due process, and they trivialize genuine sexual assault.

While protecting students from sexual assault and harassment is essential, the policy the Biden administration seeks to restore misses the mark.

To protect all students, Title IX policy must uphold reasonable standards that do not preemptively condemn the accused. Lowering the bar is not “survivor-centered,” as so many progressives claim. It’s a regressive and authoritarian attempt to strip college students of their fundamental right to due process.

So long as colleges and universities continue to put students in a prisoners’ dilemma with their Title IX policies, they coerce students into unnecessary opposition and undermine justice.