The Left’s Pattern of Overlooking Due Process 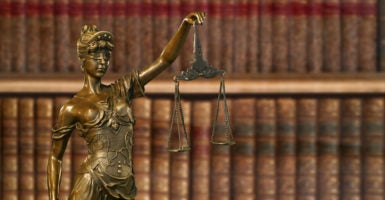 "In the hierarchy of progressive values, due process is a bottom dweller," writes David Harsanyi. (Photo: Gwengoat/Getty Images)

The notion that certain Americans are pre-emptively guilty of wrongdoing, whether there’s any corroborating evidence to back up an accusation or not, isn’t reserved for conservatives who happen to be in contention for a Supreme Court seat.

In the hierarchy of progressive values, due process is a bottom dweller.

Over the past decade, you could see the illiberalism evolving on college campuses, where Democrats subverted basic standards of justice.

It was the Obama administration that demanded schools judge cases of alleged sexual assaults under a “clear and convincing evidence” standard rather than on a “preponderance of evidence” standard, allowed accusers to appeal “not guilty” findings, and permitted the meting out of punishment before any investigation was even conducted, among other big problems.

Democrats are simply shepherding those corrosive standards into the real world.

Another area of American life where we continue to see egregious attacks on the presumption of innocence is gun ownership. You might remember that a couple of years ago, Democrats engaged in a much-covered congressional “sit-in” to support legislation that would have stripped Americans on secret government watchlists—hundreds of thousands of people who had never been accused, much less convicted, of any crime—of their constitutional right to bear arms.

Sen. Dianne Feinstein, D-Calif., in fact, proposed legislation that would have restricted not only American citizens on faulty watchlists but anyone who had been on any watchlist at any time during the previous five years and anyone who had traveled to select Middle Eastern countries.

Apparently, Democrats believe limiting the number of refugees from Syria is unconstitutional but explicitly restricting the constitutional rights of Syrian immigrants here legally is just fine.

Then again, the entire effort was a frontal attack on about half the Bill of Rights. At the time, even the American Civil Liberties Union, which has increasingly turned away from its guiding principles, argued that policies based on flawed terror lists would undermine civil liberties.

In much the same way they are attempting to sink the Brett Kavanaugh confirmation, Democrats relied on theatrics, bombastic rhetoric, and a compliant media, which framed the issue exactly how they had hoped.

You can imagine such bills will reappear when they’re back in charge. Until then, though, Democrats have been doing some gun grabbing—and I don’t mean it figuratively—on the local level.

California, a state that already features the strictest gun control laws in the country, just enacted a law that raises the allowable age to buy a shotgun or rifle from 18 to 21.

An even more outrageous new law bans Californians who’ve been hospitalized more than once in a year for mental health issues from owning a gun.

Federal law already prohibits the sale of a gun to anyone who “has been adjudicated as a mental defective.”

Until now, a person had an option to appeal the ban and show “a preponderance of evidence” that he would use firearms in “a safe and lawful manner.” Now California bans one-time patients from owning firearms for the rest of their lives.

This is an excellent way to stigmatize people who suffer from maladies that often have nothing to do with violence or criminality.

Now, I was going to ask the reader to imagine an alternate scenario in which Republicans pushed a bill prohibiting those who have been in hospitals—for, say, nervous exhaustion or an addiction—from being able to freely express their opinions in public ever again.

If a law-abiding American can be stripped of his Second Amendment rights, then why not his First Amendment rights? But then, these days, I imagine many Democrats would simply answer, “It depends on what the person is going to say.”

Another California law allows police to verbally ask to confiscate a gun rather than make their case in a written request. Under “red flag laws,” guns can be confiscated from citizens who’ve never been charged with, much less convicted of, breaking any law. And it’s getting easier and easier to do it.

All it takes in many states is for a family member, neighbor, or co-worker to accuse you of a pre-crime. One of Maryland’s many new laws (signed by Republican Gov. Larry Hogan) allows the police to confiscate weapons for up to a year—or until the next person accuses you of a crime you are only yet to commit.

There is risible evidence that these new regulations will stop mass shootings or lower gun crime. But as William Rosen, deputy legal director for Everytown for Gun Safety, explains, “red flag laws” are needed to “step into that gap.”

What gap? You know, the pesky space between protecting the ideal of presuming innocence and completely ignoring it when you feel like it.