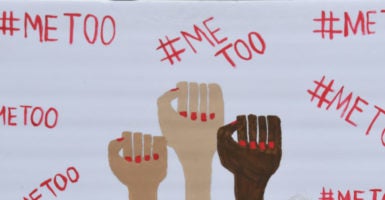 This sign was displayed when victims of sexual harassment, sexual assault, sexual abuse, and their supporters protested during a #MeToo march in Hollywood on Nov. 12, 2017. (Photo: Mark Ralston/AFP/Getty Images)

What do Prince Charming, quarterback Brett Favre, and an awkward teenager angling for a first kiss all have in common?

They could all be criminals under the American Bar Association’s proposed new sexual assault law.

The American Bar Association is considering whether to push states to amend their criminal codes to define consent in sexual assault cases as “the consent of a person who is competent to give consent to engage in a specific act of sexual penetration, oral sex, or sexual contact” and to require “that consent [be] expressed by words or action in the context of all the circumstances.”

In other words, consent must be clear, competent, and renewed for each and every sexual act. If it isn’t, the initiator has committed criminal sexual assault.

The rule’s intentions are good; many sexual assault laws are out of date and in desperate need of rewriting. But this proposed rule is an overcorrection that would lead to absurd results.

Naturally, the law shouldn’t let strangers go about kissing sleeping people or smacking buttocks. But if a wife wakes her sleeping husband with a kiss, it’s no more a sexual assault than if he playfully sneaks up behind her and surprises her with a hug.

This concern about overreach is not theoretical; we’ve seen what a rule like this leads to on college campuses where similar consent rules are the norm.

In one case, two sober students at Columbia University discussed “hooking up” and, after the woman found a condom, had sex. After a third party reported the sexual encounter to Columbia’s Title IX investigators, the man was suspended because the investigators determined that the woman hadn’t really consented.

She agreed to have sex that night, they reasoned, only because the man had pursued her for several weeks and “directed unreasonable pressure for sexual activity at,” which constituted “coercion.”

In another case, a student was punished by Brandeis University’s Title IX “special examiner” because he woke his sleeping partner with a kiss and looked at his partner’s genitals while the two were showering together.

The American Bar Association frames its proposed rule as a #MeToo era reaction to historical obstacles that rape victims faced in holding their abusers accountable. It’s a laudable goal. Historically, rape victims had incredibly high legal hurdles to overcome, and the law didn’t punish some people—for example, husbands who raped their wives and female assailants—at all.

But this rule goes too far the other way.

In addition to creating absurd results, the American Bar Association’s proposed rule raises due process concerns. The National Association of Criminal Defense Lawyers describes it as a “radical change in the law” that “assumes guilt in the absence of any evidence regarding consent.”

Protecting sexual assault victims and punishing assaulters is an important goal. But the proposed rule would turn almost anyone who’s been in a relationship into a criminal and trample the due process rights of the accused.

Thankfully, the American Bar Association has postponed adoption of its rule, for now.  It should scrap the rule entirely and work on a more nuanced one.