Arrests of MS-13 Members, Associates Up 83% Under Trump 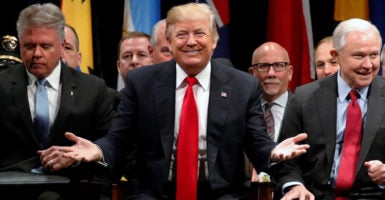 A curtain parts to reveal President Donald Trump onstage with Attorney General Jeff Sessions Friday as he participates in a graduation ceremony at the FBI Academy on the grounds of Marine Corps Base Quantico in Quantico, Virginia. (Photo: Jonathan Ernst/Reuters/Newscom)

President Donald Trump called Friday for reforming and strictly enforcing immigration law, in light of the failed terror attack in New York and increased crime across the country committed by violent gangs.

Trump said he has directed federal law enforcement to work with local police to “destroy criminal cartels, like the savages of MS-13,” and that this year there has been a 83 percent increase in arrests of MS-13 members and associates.

MS-13 is violent a transnational gang whose motto is “kill, rape, control.”

“To any member of MS-13 listening, I have a message for you: We will find you. We will arrest you. We will jail you. We will throw you the hell out of the country,” Trump said, speaking at the graduation ceremony for the FBI National Academy in Quantico, Virginia.

“Our cities should not be sanctuaries for criminals; they should be sanctuaries for Americans,” Trump said. “It is our duty to serve the hard-working citizens of our country who raise our families, cherish our values, salute our flag, and make this land our home.”

Trump is pushing Congress to replace chain migration—the typical name for allowing people to enter the country based on having extended family in the country—with a merit-based system to provide needed job skills.

“Terrorists have struck in the streets and subways of New York City twice in a few months,” Trump said. “Both terrorists came to our country through the dysfunctional immigration system that we are correcting, and rapidly. And one came through chain migration—chain migration; the other, visa lottery.”

Trump wants to get rid of the diversity lottery system, which gives a randomized group of up to 50,000 immigrants a green card each year.