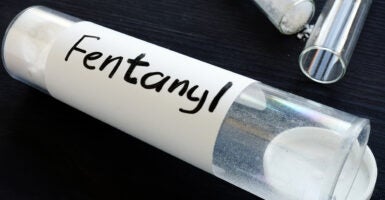 Distributing fentanyl that leads to someone’s death should result in a death sentence or life in prison upon conviction, Sen. Marco Rubio and 13 other Republican senators propose. (Photo: designer491/Getty Images)

Sen. Marco Rubio and 13 other GOP senators are proposing legislation that would make dealing fentanyl linked to a death a felony punishable by life in prison or a death sentence upon conviction.

“Fentanyl is killing Americans at a record high,” Rubio, R-Fla., said in a prepared statement. “This deadly drug is widespread throughout our country and has left no community untouched. This bill would make drug dealers pay the price for selling deadly fentanyl.”

If passed and signed into law, the Felony Murder for Deadly Fentanyl Distribution Act, would make distribution of fentanyl that results in a person’s death a felony murder punishable by either death or life in prison.

Drug overdose is now the leading cause of death for adults ages 18 to 45, according to the Centers for Disease Control and Prevention.

In 2020, fentanyl was involved in 75% of the 91,799 fatal drug overdoses in America. The number of fentanyl-related deaths is expected to increase with the influx of fentanyl entering the country across the U.S.-Mexico border.

In Mankato, Minnesota, police on Sept. 16 seized “rainbow” fentanyl pills, which look like candy. The pills were the first of their kind ever seized in Minnesota, KEYC News reported.

Sen. Mike Braun, R-Ind., is one of 13 GOP senators to join Rubio last week in introducing the bill to make distribution of deadly fentanyl a felony.

“Fentanyl is killing young Hoosiers and cutting a path of destruction through the Midwest,” Braun said in a prepared statement. “If you are peddling this poison, you should pay the price.”

Republicans repeatedly have raised concerns that the crisis of illegal immigration at the southern border allows drug traffickers the freedom to enter the U.S. illegally and distribute fentanyl and other drugs across the country.

“A wide-open southern border has fueled a fentanyl epidemic in this country,” Sen. Joni Ernst, R-Iowa, said in a written statement about her support for the bill.

“The dealers and distributors of this deadly drug must be held accountable, and that’s what we’re fighting to do,” Ernst said.

Lora Ries, director of the Border Security and Immigration Center at The Heritage Foundation, said that “too many parents have lost their children to fentanyl poisoning and yet this administration won’t pursue the correct solution of securing the border.” (The Daily Signal is Heritage’s multimedia news organization.)

To end it, Congress and the Biden administration need to completely secure the border. The current administration’s approach just throws money at treatment and rehabilitation, but that only chases the problem. Prevention is the best and most thorough solution because it saves lives.