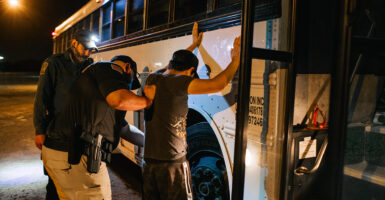 A Texas congressman contends the Biden administration is hampering the ability of Border Patrol agents to do their jobs. Pictured: A Texas state trooper and Border Patrol officer on Nov. 17 in La Joya, Texas, detain a migrant suspected of being involved in a smuggling case. (Photo: Brandon Bell/Getty Images)

Americans in every state—not just those in the southwest—should be concerned about President Joe Biden’s lack of border security and the resulting drug crisis, a Texas congressman says.

“Every state is a border state now,” said Rep. Brian Babin, R-Texas. “I think the government has spent about $350 million this past year on transportation costs to let people come across the southern border, whether it be Texas, Arizona, New Mexico, or California, and fly them or bus them all over our country.”

According to Babin, mass immigration is part of the Democratic Party’s grand strategy to get more votes.

“Not only do they bring people in here by the millions—over 2 million last year alone—they get them on government benefits. They put them on welfare. They put them on free health care, free education, and exempt them from some of the things that are really levied against us, such as vaccine mandates,” the Texas lawmaker said.

And so, I think they get people that are immediately thinking that being dependent on the government is the right way to go. And so that’s a new voter base.

Babin expressed concern about a number of  municipalities that let noncitizens vote in local elections, and said many Democrats seek to use illegal immigration to “have a majority in perpetuity.”

“I’m all for, all for legal immigration, but it’s got to be done legally,” he said. “My heart goes out to people who are trying to better their lives … but the law is the law.”

Lack of law enforcement from the Biden administration has led to drug- and human-smuggling cartels’ control of the U.S.-Mexico border, Babin said, and it enables human traffickers to make up to $14 million per day in profits by smuggling people across the border.

Babin said the record-high level of drug overdose deaths—an estimated 100,000 Americans from April 2020 to April 2021—can be attributed largely to fentanyl and opioids crossing the southern border, adding:

The drug trade that is coming across the border is at all-time highs. And it’s simply because we have an open border now, and these cartels have been empowered to do their dastardly deeds. And Americans are dying because of it.