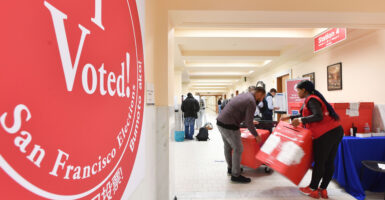 Municipalities in California, Maryland, and Vermont are among those that allow noncitizens to vote in local elections, while other jurisdictions are considering doing so. Pictured: Election officials replace filled ballot boxes with empty ones Nov. 6, 2018, at San Francisco City Hall. (Photo: Josh Edelson/AFP/Getty Images)

Litigation in Vermont has highlighted the expanding trend of noncitizen voting, which two cities in that state recently allowed.

Municipalities in California and Maryland similarly allow noncitizens to vote in local elections. Other jurisdictions are considering doing so.

So far, these efforts to allow noncitizens to vote don’t apply to national elections for president or Congress, nor to state offices such as governor or state legislator. For Democrats especially, though, this has been an emerging issue.

In July, The New York Times published an essay by Atossa Araxia Abrahamian, a senior editor at The Nation, under the headline “There Is No Good Reason You Should Have to Be a Citizen to Vote.”

Congress passed legislation in 1996 to prohibit noncitizens from voting in federal elections. State constitutions vary, although so far the idea has been entirely a local matter. It has been more popular in local jurisdictions of some states than in others.

Local laws giving the vote to noncitizens also vary. Some apply only to legal residents, such as green card holders. Others apply to illegal immigrants as well.

In 2018, House Republicans adopted a resolution recognizing “that allowing illegal immigrants the right to vote devalues the franchise and diminishes the voting power of United States citizens.”

All but one Republican voted for the measure, which was adopted 279-72. A total of 71 House Democrats voted against the resolution, while 49 joined Republicans in supporting it.

Here is a rundown of seven states where local jurisdictions either allow noncitizens to vote or are considering doing so, and another four that rejected the idea in the past three years.

The idea of noncitizen voting emerged in Maryland in the early 1990s and has grown to include 10 jurisdictions.

Takoma Park, a city of about 18,000 in Montgomery County just outside the nation’s capital—began allowing noncitizen voting in March 1992.

Since that time, nine other local jurisdictions have followed suit not far from Washington: Barnesville, Chevy Chase, Garrett Park, Glen Echo, Martin’s Additions, and Somerset, which are all in liberal Montgomery County, and Hyattsville, Mount Rainier, and Riverdale, all in liberal Prince George’s County.

Noncitizen voting hasn’t come to the nation’s second-largest city yet. But the Los Angeles Unified School District authorized a study to determine whether it should extend voting eligibility to noncitizens in school board elections.

The change would require current voters to approve a ballot question.

The study, approved in November 2019, was stalled as Los Angeles dealt with the COVID-19 pandemic. But the school district has revived it.

“Our parents are our partners in the education process, and it is critical that all of our parents have access to the democratic process that chooses this board,” Richard Vladovic, then the school board’s president, said when the board approved the study. “We hope that this study group can think of ways to include all parents while keeping their immigration status private and safe.”

Although the Los Angeles school district hasn’t yet determined the policy, Vladovic’s comment about “keeping their immigration status private” suggests that the district wouldn’t limit the vote to legal residents, as other municipalities have done.

If it goes that way, Los Angeles would follow the lead of San Francisco, which allows noncitizens to vote in school board elections.

In San Francisco, voting eligibility for school board elections extends to anyone regardless of immigration or citizenship status. Voters approved a measure in 2016 to allow noncitizen parents or legal guardians—including illegal immigrants—to vote in school board elections, making the City by the Bay the first and only California city to do so.

In 2018, the San Francisco Board of Supervisors—the local version of a city council—passed an ordinance to notify voters that their information could be available to U.S. immigration officials. City officials said they were concerned about the Trump administration’s crackdown on illegal immigration.

In October 2013, then-Gov. Jerry Brown, a Democrat, vetoed a bill passed by the California Legislature that would have allowed permanent legal residents to serve on juries.

“Jury service, like voting, is quintessentially a prerogative and responsibility of citizenship,” Brown said.

In June, Illinois state Sen. Celina Villanueva, a Democrat, proposed legislation to “allow noncitizens to vote in local school board elections” across the state.

“For too long, these families have been systematically excluded from participating in our democracy, even at the most basic level,” Villanueva said. “We owe it to them, to our young learners, and to our city to bring them into the process. We talk a lot in this body about diversity, equity, and inclusion, and now we have the chance to put those words into action.”

Illinois was the first state in the nation to provide Medicaid coverage for residents regardless of immigration status.

Chicago was the first major American city to allow noncitizen voting, going back to 1989.

Chicago’s law allows noncitizens to vote and serve on bodies called school councils, but not the school board. School councils help run individual schools, but are nevertheless significant in hiring principals, approving how money is spent, and overseeing improvement plans.

As reported by The Daily Signal, the decisions by Montpelier and Winooski to allow noncitizen voting spurred the Republican National Committee, the Vermont Republican Party, and a group of Vermont voters to sue the two cities, each of which has a population under 8,000.

Voters in Montpelier and Winooski approved measures to allow noncitizens to vote in local elections for offices such as mayor, city council, and school board.

These and other changes to the two city charters also required the approval of Vermont’s Democrat-controlled Legislature, which in June overrode a veto by Gov. Phil Scott, a Republican.

The GOP lawsuits argue that Vermont’s Constitution says only U.S. citizens age 18 and older are qualified to vote.

The nation’s capital may take the plunge. D.C. Council member Brianne Nadeau, a Democrat, has reintroduced a bill to allow noncitizens to vote in local elections.

Nadeau’s proposal would make legal permanent residents, such as green card holders, eligible to vote in elections for the District’s mayor, attorney general, council, school board, and advisory neighborhood commissions.

About half of D.C. Council members are co-sponsors, but this marks the fifth attempt to pass such a measure, according to Stateline, a project of Pew Research Center. Since the District is an appendage of the federal government, Congress would have the authority to reverse the decision.

“We all deserve to have a voice in who represents us,” Nadeau told Stateline. “I can’t control what’s allowed at the federal level, but I can control what we do locally.”

The New York City Council is reviewing a proposal to enfranchise noncitizens for local elections that has the support of 34 Democrat members.

“We have the votes to pass it. We have the opportunity to make the city a role model for the nation, and this is a moment we should not lose,” council member Ydanis Rodriguez, a Democrat who represents Washington Heights and sponsored the measure, told the New York Daily News. “This is about addressing taxation without representation.”

The change in New York City’s charter, if enacted, would allow more than 600,000 noncitizens to vote in local elections such as for mayor, council, and school board.

Six cities in Massachusetts have started the process of considering giving noncitizens the vote, WBUR reported.

The jurisdictions that set proposals in motion in 2019 are Somerville, Brookline, Amherst, Cambridge, Newton, and Wayland.

The Massachusetts Legislature, which would have to approve the changes in the city charters, hasn’t acted, according to Stateline.

States That Say No

Voters in four states have blocked noncitizens from voting in local elections.

The blue state of Colorado handily backed Joe Biden for president last year, giving him 57% of the vote. But that same year, voters approved an amendment to the state Constitution that explicitly requires voters in all elections to be U.S. citizens. The amendment won 62% of the vote.

States that went to Donald Trump in 2020 approved similar measures by even larger majorities.

For example, 79% of voters in the battleground state of Florida approved a constitutional amendment limiting voting in all elections to citizens.

In 2018, 65% of North Dakota voters approved a constitutional amendment clarifying that voters must be U.S. citizens.