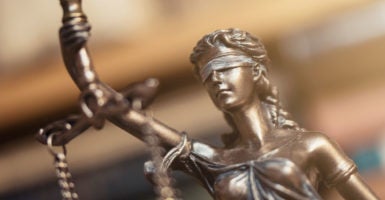 Investigating sexual assaults to find the truth and prevent harm to victims is serious business. And so, too, is conducting these investigations and trials fairly to protect the due process rights of students. (Photo: Getty Images)

We forget things all the time—where we put our keys, whether we turned the oven off, anniversaries, our due process rights.

Due process rights were important 200-plus years ago, when the Framers drafted the Constitution and were worried about the unlimited power of England’s Star Chamber.

That court did whatever it wanted. It ignored exculpatory evidence, forced defendants to incriminate themselves, and invented crimes to punish the innocent.

But we don’t have that problem today, do we? Actually, we do.

Students at colleges around the county will tell you that star chambers are alive and well in universities’ sexual assault tribunals.

Consider, for example, Purdue University’s Advisory Committee on Equity. In a lawsuit that the U.S. Court of Appeals for the 7th Circuit greenlighted, the plaintiff alleges that he was suspended for a year after a hearing that lacked even the most basic due process procedures.

Even before the Committee on Equity heard his case, the student was suspended from the Navy ROTC, banned from all buildings where his accuser had classes, and barred from eating in his usual dining hall because his accuser also ate there.

In fact, the committee itself never questioned the accuser, never called her to testify, and never required her to give a sworn statement.

He goes on to allege that, at his hearing, two of the three committee members stated that they hadn’t even read the Title IX investigator’s summary of the evidence.

The one who did read it asked the student questions that assumed his guilt. But because he hadn’t seen the evidence against him, he couldn’t answer those questions.

The student also alleges that he asked the committee to consider exculpatory evidence. It refused.

He also asked for permission to present as a witness his roommate, who would testify that he was present at the time of the alleged assault and that the accusation was false. The committee refused.

He further alleges that a week later, the dean of students (who was also the chairperson of the committee) sent him a perfunctory letter saying that he had been found guilty of sexual assault and was suspended for a year.

The student appealed to Purdue’s vice president for ethics and compliance, who ordered the dean to identify the factual basis for her judgment. All she wrote were two paragraphs summarizing the allegations made against the student and her conclusion that the accuser was credible, and the accused not credible.

In its opinion giving his lawsuit against the school a green light, a unanimous panel of the 7th Circuit held that if his allegations are true, he has more than adequately demonstrated a violation of his due process rights.

Judge Amy Coney Barrett, who wrote the court’s opinion, explained that Purdue owes students “relatively formal procedures” in cases like this that carry such hefty punishment.  But the procedures that Purdue allegedly used to sentence the student to a yearlong suspension, she added, “fell short of what even a high school must provide to a student facing a days-long suspension.”

Even just the committee’s refusal to share its evidence with the student was constitutionally unfair, to say nothing of all the other ways it denied him due process.

That list of due process violations suggested to the court that the Committee on Equity decided the student was guilty “based on the accusation rather than the evidence.”

This lawsuit, and others like it, show that campus administrators have forgotten that justice is a two-sided coin.

Investigating sexual assaults to find the truth and prevent harm to victims is serious business. And so, too, is conducting these investigations and trials fairly to protect the due process rights of students.

Due process is important because it protects the innocent. Sometimes, we just need a reminder.