Why Did US Declassify Size of Its Nuclear Stockpile? 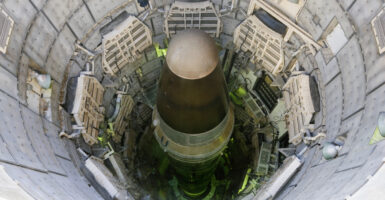 Virtue signaling about transparency and disarmament goals will not be the way to prevent nuclear war. (Photo: Michael Dunning/Getty images)

The State Department declassified the total number of nuclear warheads in the U.S. stockpile on Tuesday, the first time since 2017.

To be clear, the U.S. does not deploy all 3,750 warheads on its delivery systems launched from air, sea, and land. The New START arms control agreement with Russia constrains the U.S. to deploying under 2,000 strategic nuclear warheads. The rest of the 3,750 include warheads in reserve and a couple hundred nonstrategic warheads (those not constrained by New START).

After keeping this number classified for the last several years, many are scratching their heads wondering: Why release this number now? Why declassify at all?

It’s not like our adversaries share this type of information with us. While Russia reports its numbers of deployed warheads limited by New START, it does not provide information on its stockpile of nonstrategic warheads.

Russia maintains about 2,000 of these nonstrategic warheads as part of its total stockpile of almost 5,000 warheads total, according to open sources estimates. But as explained by Lt. Gen. Robert Ashley, former director of the Defense Intelligence Agency, Russia’s stockpile is “likely to grow significantly over the decade” as Russia keeps its nuclear weapon production facilities active.

China is even less transparent about its nuclear stockpile, as it refuses to engage in any nuclear dialogues or information sharing with the U.S. Recent government estimates put China’s stockpile at 200 nuclear warheads, but that number is expected to grow perhaps exponentially over the next decade.

Recent discoveries of new missile silo construction sites indicate that China is building up to 360 new silos equipped with long-range missiles that analysts think may carry three to five warheads each (some analysts even claim they could carry up to 10). If taken to their maximum, these numbers could exceed the United States’ arsenal of long-range missiles. This does not even include warheads deployed on other Chinese delivery platforms.

According to the State Department’s announcement, declassifying the U.S. stockpile fosters transparency, which is “important to nonproliferation and disarmament efforts.” The declassification might be an effort of good faith to show Russia and China we are leading the way to global disarmament.

But would that really convince Russia and China to reverse course and agree to limits on their nuclear weapon buildups? Does doing the “right thing” mean that our adversaries will follow? Unlikely.

This is especially true when Russia and China know that the U.S. has no current capability to produce new nuclear weapons. While the U.S. is working to rebuild its nuclear production infrastructure since allowing it to atrophy after the Cold War, we are currently the only nuclear weapons state in the world—including North Korea—that can’t build a nuclear weapon.

Our adversaries already know that the only direction the size of our nuclear arsenal can go right now is down.

Until that changes, why would they have any incentive to pump the breaks on their own production lines?

At the end of the day, declassifying U.S. stockpile numbers probably doesn’t do much harm. At best, it was unnecessary.

But it does call into question the Biden administration’s goals. As Russia and China build up their nuclear forces—and the threat of nuclear employment increases—the No. 1 priority of the U.S. should be ensuring a strong nuclear deterrence posture.

Indeed, the last five confirmed secretaries of defense—including the current, Secretary Lloyd Austin—have affirmed nuclear deterrence as the No. 1 mission for national security.

Virtue signaling about transparency and disarmament goals will not be the way to prevent nuclear war. Especially as its Nuclear Posture Review is underway, the Biden administration must remain clear-eyed about the threats facing the U.S. and focus on ensuring the U.S. maintains a strong and reliable nuclear deterrent.