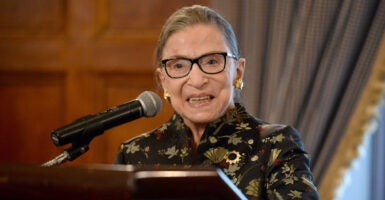 The late Supreme Court Justice Ruth Bader Ginsburg, pictured, was a trailblazer for women’s rights. One year after she died, the American Civil Liberties Union took her quote out of context by replacing female pronouns with gender-neutral language. (Photo: Michael Kovac/Getty Images)

The American Civil Liberties Union tweeted a botched quote on Sept. 18 that the late Justice Ruth Bader Ginsburg supposedly told the Senate Judiciary Committee during her confirmation hearings in 1993.

On the one-year anniversary of Ginsburg’s death, the American Civil Liberties Union attributed the following quote to her: “The decision whether or not to bear a child is central to a [person’s] life, to [their] well-being and dignity. When the government controls that decision for [people], [they are] being treated as less than a fully human adult responsible for [their] own choices.”

Ginsburg, one of the left’s most dogged legal proponents of abortion, actually said, “The decision whether or not to bear a child is central to a woman’s life, to her well-being and dignity. It is a decision she must make for herself. When Government controls that decision for her, she is being treated as less than a fully adult human responsible for her own choices.”

The differences between the two quotes are slight but profound. Ginsburg’s version discusses women while the American Civil Liberties Union’s version substitutes the female pronouns with gender-neutral language. The edited quote makes it seem as if men can also bear children.

This erasure showcases just how much the left has doubled down on its campaign to erase any differences between men and women and make females unnecessary and obsolete. Liberals are so focused on erasing women that they will even slander a feminist icon who contributed to landmark changes in equality between the sexes.

Ginsburg herself pioneered women’s equality. She was a trailblazer who contributed to legal and societal equality for women via her work as an attorney at the American Civil Liberties Union.

The American Civil Liberties Union also took Ginsburg’s quote completely out of context. Ginsburg was demoted in her 20s because she was pregnant. Even though she graduated from Cornell University and Columbia Law School, she was denied a Supreme Court clerkship because she was a woman.      .

She co-founded the Women’s Rights Project at the American Civil Liberties Union and later, argued six sex-discrimination cases before the Supreme Court, winning all but one.

If any woman has reserved the right to talk about women’s rights, it’s Ginsburg.

The campaign to erase women has been in full effect for a couple years now. On Jan. 1 House Speaker Nancy Pelosi, D-Calif., and House Rules Committee Chair James McGovern, D-Mass., unveiled the Rules of the 117th Congress. One, of many, changes included honoring “all gender identities by changing pronouns and familial relationships in the House Rules to be gender neutral.”

The Biden administration decided this year to bleep out the word “mother” and replace it with “birthing people.” In June, Health and Human Services Secretary Xavier Becerra struggled to answer questions as to why the word “mom” was offensive.

Hollywood is so far gone on the gender-neutral train, it’s never coming back. I’m surprised female actors are allowed to take female roles. Why not just have the men do it or, better yet, someone called “they”?

Erasing women through language, an Orwellian omen, disregards the unique biological differences that both sexes contribute to society. We should honor and respect both sexes for how they contribute to a flourishing society.

The left has surpassed the changes both conservatives and liberals have made toward women’s rights. It chooses now to ignore women and, instead, pay homage to its extreme leftism.

It’s a dangerous trend that needs to stop.