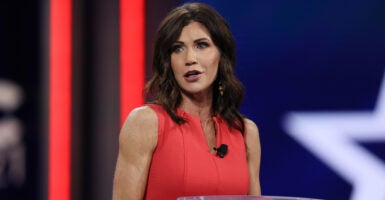 South Dakota Gov. Kristi Noem, here addressing the Conservative Political Action Conference on Feb. 27 in Orlando, Florida, reportedly is wavering in her promise to sign a bill that would protect girls high school and collegiate athletics from encroachment by biological males who "identify" as females. (Photo: Joe Raedle/Getty Images)

Imagine training as a female track athlete for years in middle school and high school, reaching the heights of your potential at a championship meet, only to lose to a biological male who “identifies” as female.

What’s the young woman’s redress for this blatant unfairness?

In some of the states where this has been an issue, legislatures have sought to implement laws to protect biological girls and young women.

Even as the Senate Judiciary Committee held a hearing Wednesday on the pro-LGBT Equality Act, states have been enacting measures to enable     females to continue to enjoy fair athletic competition and to compete only against other females.

According to Save Women’s Sports, an organization that advocates for girls and women and for fair play in sports, there are more than two dozen states currently considering laws to protect women’s sports.

“The act is pro-women and pro-girls, and only acknowledges the biological differences between men and women,” said state Rep. Kaylee Tuck, a Republican and the bill’s sponsor.

In Mississippi, Gov. Tate Reeves, a Republican, on March 11 signed into law a bill that makes clear that “students of the male sex” will not be allowed to play on “athletic teams or sports designated for females, women or girls.”

South Dakota Gov. Kristi Noem, also a Republican, as recently as March 8 said she intended to sign a similar bill, HB 1217, that the state Legislature sent to her desk March 10. But The Daily Caller News Foundation on Friday reported that Noem was wavering in her support for the bill in the face of opposition from big business and other special interests, and later sent it back to the Legislature.

A year ago, in March 2020, Idaho’s governor signed a similar bill into law, although a federal judge has blocked it from taking effect. That ruling is on appeal.

Headlines on news stories on the subject in national and even local news media often frame the issue in ways that suggest that these laws are discriminatory.

A Politico/Morning Consult poll, released March 10, showed that position is widely held. Among 1,990 registered voters who were surveyed, 53% supported prohibiting transgender “women” from female athletics, while just 32% were opposed to banning them.

A 2019 Rasmussen Reports poll similarly found 51% of American adults opposed allowing transgender students to “participate on the sports teams of the gender they identify with,” as opposed to their biological sex, and only 29% of adults supported allowing biologically male trans athletes to compete against girls based on their gender identity.

As such, it’s hard to fathom why these state bans have become so controversial, particularly when the number of transgender “females” is minuscule and the number who are athletes is even smaller.

That doesn’t mean girls sports aren’t worth fighting for through legislation or other means. To the contrary, it’s imperative, given that the trans athletes have the support of influential LGBTQ organizations and much of the mainstream media, even though that doesn’t align with the majority of Americans’ views.

It’s not just about running track, or girls being able to take home a medal, finally achieving success after years of training. The issue is about protecting females and their right to fair play, protecting the advances they’ve made.

And ultimately, it’s about acknowledging inherent biological and physiological differences between the two genders that make them separate and wonderful, with distinct advantages and disadvantages in the realm of sports.

This commentary has been updated to reflect developments in South Dakota.