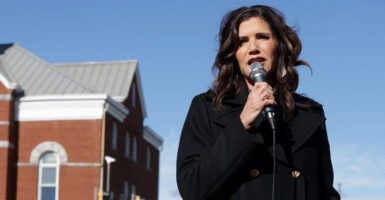 After expressing her excitement to sign a bill banning biological males from women’s sports, South Dakota Gov. Kristi Noem is wavering in her support for the legislation due to pressure from groups in South Dakota, The Daily Caller News Foundation has learned.

Noem, a Republican, said as recently as March 8 that she was “excited” to sign HB 1217, a bill that not only bans biological males from participating in women’s sports but also establishes that there are only two biological sexes (male and female) and that there are “inherent” differences between men and women.

The Legislature sent the bill to Noem’s desk March 10, but the governor has since suggested that she may not sign it.

Noem’s office did not directly address why she is wavering in her support for the bill, but confirmed that the governor has not made up her mind on whether she will sign it.

“Gov. Noem is still weighing 106 pieces of legislation that have action due next Friday, and that is one of them,” Noem’s communications director, Ian Fury, told The Daily Caller News Foundation on Friday morning.

Later on Friday, Noem sent the bill back to the South Dakota Legislature with suggestions, citing “vague and overly broad language.”

In a press release, Noem said that she believes “boys should play boys’ sports, and girls should play girls’ sports,” but warned that the bill’s “vague and overly broad language could have significant unintended consequences.”

“For example, Section 2 of House Bill 1217 requires a student athlete to verify, each year, that the student ‘is not taking and has not taken, during the preceding twelve months, any performance enhancing drugs, including anabolic steroids,” the governor said, adding:

Presumably, this requirement was included to address a student taking these drugs as a part of a gender transition, but House Bill 1217 is not limited in this way. Rather, if a male student athlete failed to make the football team, and later learned that another student on the team was taking steroids without disclosing it, the student who didn’t make the team would be entitled to sue both the school and the steroid-using student for damages.

“We’re still looking at it, and I probably, in the next two to three days, will come to a decision,” Noem had said in a Thursday interview with the Argus Leader. “It’s a complicated bill, even in that there are parts of it that aren’t written so well.”

The bill is one of many aimed at protecting women and children introduced in 2021 thus far. A review conducted by Axios found that GOP lawmakers have introduced 61 pieces of legislation in at least 25 states that criminalize gender transition surgeries for children or prevent biological males from participating in women’s sports.

The latest Politico/Morning Consult poll found that 53% of registered voters do not support biological males competing in women’s sports.

If Noem decides to veto the bill, two-thirds of both the House and the Senate would be required to vote for an override—and groups such as the Greater Sioux Falls Area Chamber of Commerce and the Sioux Falls Sports Authority argue that the law could negatively effect South Dakota’s economy.

When the North Carolina Legislature passed a bill in 2016 banning local governments from requiring businesses to allow transgender persons to use their preferred bathroom, dozens of events were canceled in protest, such as a weekend Bruce Springsteen show.

“Some things are more important than a rock show and this fight against prejudice and bigotry—which is happening as I write—is one of them,” Springsteen said at the time. “It is the strongest means I have for raising my voice in opposition to those who continue to push us backwards instead of forwards.”

The American Principles Project has both publicly and privately encouraged Noem to sign the bill and engaged in dialogue with legislators across South Dakota regarding HB 1217.

Jon Schweppe, the American Principles Project’s director of policy and government affairs, told The Daily Caller News Foundation that he began hearing from legislators and policy organizations that Noem was facing pressure not to sign the bill from South Dakota groups after she tweeted her support March 8.

The South Dakota governor faces pressure from the NCAA, the South Dakota Chamber of Commerce, and an Amazon plant in Sioux Falls, which is “quietly threatening” to leave over the bill, the American Principles Project leader told The Daily Caller News Foundation.

Schweppe referred to Noem’s comments to the Argus Leader, claiming that “she’s already kind of backtracking and preparing the stage for a veto.”

“I’m hoping she doesn’t do that because she will destroy her political career,” Schweppe said. “She’s trying to become president or have a national profile.”

South Dakota state Rep. Rhonda Milstead, one of HB 1217’s sponsors, told The Daily Caller News Foundation on Friday morning that opposition and pressure against the bill was “inevitable,” but perhaps could have been avoided if Noem had signed it as soon as it got to her desk.

Milstead speculated that Noem is working on some language changes that she will require before she will sign the bill—and Milstead argued that this is not Noem’s purview.

“She’s the executive branch, the Legislature is the one that passes laws,” Milstead said. “So if she wants to change the language, it has nothing to do with style and form. It has everything to do with content, context.”

“That’s not appropriate,” she added. “It’s really going outside of the powers of the branch. That’s not what the executive branch is for.”

The bill is strongly supported by both Republican and faith-based groups in South Dakota, such as the South Dakota Catholic Conference and the Family Heritage Alliance Action.

“We have been encouraging her to stand strong and follow through with her signature,” Norman Woods, executive director for the Family Heritage Alliance Action, told The Daily Caller News Foundation.

“We have been asking her to hold the line and protect women’s sports here in South Dakota,” he added.

This report has been updated to reflect Noem’s decision to send the bill back to the Legislature.