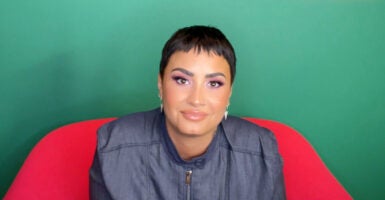 Pop star Demi Lovato announced Tuesday in a video on her Instagram account and podcast, “4D with Demi Lovato,” that the singer now identifies as nonbinary.

This appears to be an increasingly popular decision among celebrities that is harmful to young people and represents America’s increasing decline toward embracing moral relativism as a whole.

“Over the past year-and-a-half, I’ve been doing some healing and self-reflective work,” Lovato said. “And through this work, I’ve had the revelation that I identify as nonbinary. With that said, I’ll be officially changing my pronouns to they/them. I feel that this best represents the fluidity I feel in my gender expression and allows me to feel most authentic and true to the person I both know I am and am still discovering.”

Lovato went on to say that she is making this announcement because “I was ignoring my truth, and I was suppressing who I really am in order to please stylists or team members or this or that, or even fans that wanted me to be the sexy, feminine pop star in the … leotard and look a certain way, you know?”

In March, Lovato announced during an interview on “The Joe Rogan Experience” podcast that the singer was pansexual. “I’m so fluid now, and a part of the reason why I am so fluid is because I was super closeted off,” Lovato said. “I heard someone call the LGBTQIA+ community the ‘Alphabet Mafia.’ I’m part of the Alphabet Mafia and proud.”

While Lovato certainly isn’t the first pop star to label herself as nonbinary, she does seem to be joining an uptick of celebrities making similar pronouncements. There are at least 13 popular celebrities, working right now, who consider themselves nonbinary.

Why now? A common misconception is that people are now less afraid to announce themselves as nonbinary thanks to the prevalence of the LGBTQ community in everyday life.

However, it makes more sense to view the wave of new nonbinary people as a popularity contest, a contagious frenzy: Making such a claim grants attention to stars who crave it. If the person is truly struggling with identity or gender issues, embracing this new lifestyle might at first seem to “fix” that crisis temporarily.

Even if a person is struggling with recognizing where they fit in a world of two genders, pop star or not, it’s dangerous to applaud a bold statement like this with fervor, as many already have.

Lovato’s adoring fans are mostly teens and preteens, a particularly impressionable age group. The teen years are already tumultuous ones full of self-esteem issues, battling parental boundaries, and craving acceptance from peers. This will only compound problems.

Often, teens claiming to be nonbinary or “finding my truth” to reflect their role models or as a coping mechanism for gender identity issues are more depressed, anxious, and even suicidal than other teens. On its website, Elevations RTC, an “all gender residential treatment program” in Utah, said:

It is dangerous for influential members of society to embrace such a morally relativistic viewpoint, especially about something so deeply personal and important. The concept of gender fluidity is both anti-science and illogical, but has far-reaching effects due to its ignorance of the importance and unique qualities of male and female biological differences.

Here is one example: After Lovato made her announcement, she interviewed Alok Vaid-Menon, who Lovato said was “an important voice within the nonbinary community.” At one point in the interview, Vaid-Menon said that gender expression was irrelevant:

What moving beyond gender norms is about is fighting for your right to determine what your gender is … people always think that gender is what we look like but that’s not necessarily true. It’s about who we are.

Not only does it seem like people in the community cannot quite agree on what nonbinary means, such is its perplexity, practically speaking, neither one of these definitions make sense. Who a person really is on the inside—particularly genitalia—is clear. Case closed. Denying this is denying science, reality, and the definitive nature of biology.

Vaid-Menon’s definition is even more nonsensical: If gender expression is who a person is, or perhaps how a person feels, then how does that play out in real life? Where does this person go to the bathroom? What does this person wear? Plural pronouns indicate multiple genders within one—an impossibility save for the rare hermaphrodite.

The world does not offer conveniences and necessities for a gender-fluid person, not because it has failed to advance this far, but because it’s so wrongheaded.

Moral relativism has always been dangerous for Western culture and as it has seeped further into the American way of life, its tentacles are far too obvious, even to the point of absurdity.

As frustrated as celebrities might feel about their gender and identity, embracing a fluid spectrum—and lauding it for all the world—is not the answer. We must hold fast to biology, logic, and truth.