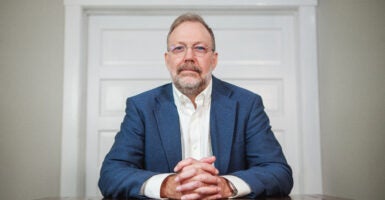 The appellate court also reversed a lower court’s dismissal of his lawsuit against university officials.

Shawnee officials had punished Meriwether because he refused to accede to a biologically male student’s demand to be referred to as a woman, complete with a female name and feminine pronouns, in accordance with the Portsmouth, Ohio, school’s policy, announced in 2016.

The court ruled March 26 that the university had clearly violated Meriwether’s First Amendment rights to free speech and free exercise of religion. Meriwether is a devout Christian.

The court’s ruling assailed officials at Shawnee State for bending to the cause of the day of the LGBT mob, which currently includes twisting language to fit a woke agenda.

“Traditionally, American universities have been beacons of intellectual diversity and academic freedom,” the 6th Circuit wrote in its opinion in Meriwether v. The Trustees of Shawnee State University:

They have prided themselves on being forums where controversial ideas are discussed and debated. And they have tried not to stifle debate by picking sides.

But Shawnee State chose a different route: It punished a professor for his speech on a hotly contested issue. And it did so despite the constitutional protections afforded by the First Amendment.

It’s worth noting in this case that Meriwether had been a fixture at the school for 25 years and hadn’t had an incident until one obviously male student informed the professor that he must from then on be referred to as a woman.

After this initial encounter and new information, Meriwether informed the appropriate school authorities, and they worked out a compromise that he initially proposed.

The court’s ruling refers to the transgender student as “Doe,” and in the proposed compromise, “[Meriwether] would keep using pronouns to address most students in class, but would refer to Doe using only Doe’s last name.”

The ruling noted that “Doe remained dissatisfied,” complained again, and this time, Meriwether was informed he had to abide by the school’s official policy—with no compromises—or he would receive disciplinary action.

Meriwether continued to call the transgender student by the student’s last name. The student participated often in class and received a high grade.

Nonetheless, the student complained and eventually school officials filed a Title IX report accusing Meriwether of “creating a hostile environment” and then later placed a written warning in his file.

In short, the case showed Meriwether went to great lengths to accommodate the student. It also showed what lengths the student and the school went to to vilify him.

That’s good news on many fronts, including for those who want the First Amendment to retain its authority everywhere—including at smaller colleges like Shawnee subject to leftist indoctrination. As much as Shawnee administration officials tried to violate Meriwether’s First Amendment rights, they failed.

It’s also good news in that this appears to be a landmark decision in a case that perfectly exemplifies where transgender issues are colliding with personal autonomy and religious liberties.

Because the court took it seriously, reversing the lower court’s decision, it enables us to observe clearly where the battle lines are drawn in a distinctive way so that everyone can understand the importance of these issues going forward.

That’s exactly what Canadian clinical psychologist Jordan Peterson predicted through his similar experience several years ago before becoming famous in America. He refused to be compelled by the Canadian government to call someone by “their” preferred name or pronoun or else face punishment.

He was excoriated for holding the line on language, something that the LGBT movement and the mainstream media downplayed then and now as trite.

They know it isn’t, which is why they push this agenda—and why Peterson and now Meriwether have held the line. The 6th Circuit’s ruling vindicates Meriwether’s struggle, even while mirroring Peterson’s.

Peterson recently interviewed Abigail Shrier, author of the 2020 book “Irreversible Damage: The Transgender Craze Seducing Our Daughters.” Shrier described the California insurance commissioner’s new policy that states that a double mastectomy of the healthy breasts of a biological woman who “identifies” as male would no longer be referred to as cosmetic, but rather as something that “corrects abnormal structures.”

Peterson and Shrier could not be more correct, and the Meriwether case demonstrates that. In being punished for refusing to kowtow to a student’s illogical demands, he was forced to give in or sue.

Shawnee State is complicit in throwing gasoline on the fire of the culture wars by yielding to the pressure of the disproportionately influential LGBT movement.

As Peterson explains, language is associated with action. So, if a professor can be compelled by a student or a school administration to use speech that is illogical, inconsistent, or unnecessary, that opens up the possibilities to further abuse of language and further punitive action.

That’s why the court’s ruling is so important and a breath of fresh air in this now-toxic environment, in which the LGBT movement seeks to quash a person’s right to hold his or her own views and to speak the absolute truth in accordance with those beliefs.