Transgender Pronouns Are Just the Beginning. How Coerced Speech Could Erode Liberty for Everyone. 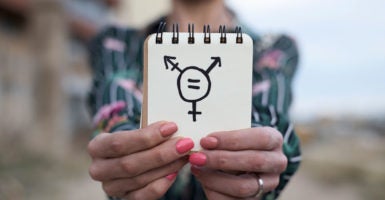 During the past decade, transgender ideology has gained significant ground in society and culture. And, as its demands have been translated into public policy, it threatens not only the livelihood of public employees who don’t conform to speech codes, but also the free and democratic nature of American society.

These are not idle fears. Consider that in the United Kingdom, a Reformed Baptist doctor was recently fired by the National Health Service for his belief that a person’s sex is biologically determined rather than “assigned” at birth. A Christian math teacher was suspended and is under investigation for saying, “Well done, girls” to a group of students that included a transgender student who identifies as a boy.

Similarly, in the United States, the University of Minnesota recently introduced a draft policy that would coerce faculty, staff, and students to use pronouns such as “ze,” “sie,” “zir,” “hir,” “co,” “ev,” “xe,” and “thon.” Students who defy this draft would risk expulsion, while faculty and staff would risk disciplinary action—or termination.

Brown University recently censored one of its own social science professors for publishing research showing that “rapid-onset gender dysphoria” is often caused by peer pressure.

These examples serve as a forboding preview of more things to come, not only for those with gender dysphoria, but also for the rest of society. A portion of the political left has made it clear that it intends to curb the freedoms of religion and speech that Americans now enjoy.

Americans should be free to use the pronouns they think appropriate, especially if the new speech codes conflict with their convictions. As Abigail Shrier noted, when groups disagree with one another, they are typically allowed to retain the vocabularies that arise from their worldviews.

This can sometimes be confusing, but it is good and right. One person’s “products of conception” is another person’s “baby girl.” One political party’s “stimulus package” is another party’s “fattening of the 1 percent.”

So, when Jews, Christians, or Muslims are required to speak as if gender is an artificial construct rather than an unchangeable biological reality intended by God for our good, our very religious liberty is being curtailed. Religious liberty, after all, involves more than the right to worship God privately. As the First Amendment states, it entails the right to exercise our religion, aligning our lives with our convictions and doing so openly and without fear.

But a citizen doesn’t need to have religious reasons to affirm that sex is biological and binary. As Ryan T. Anderson argues, “The best biology, psychology, and philosophy all support an understanding of sex as a bodily reality, and of gender as a social manifestation of bodily sex. Biology isn’t bigotry.” Thus, the new speech codes undermine not only religious liberty but also freedom of speech. Again, the First Amendment suffers a hit.

As I argue in “Letters to an American Christian,” this suppression of free speech and religious exercise erodes the free and democratic nature of American society.

Often, the proponents of speech codes assume that disagreement implies hatred. But this assumption ignores the fact that disagreement can often reflect compassion. I disagree with white nationalism, for instance, not because I hate white nationalists, but because I love my brothers and sisters of color. Citizens should be free to disagree without being viewed as bigots.

Speech codes encourage hypocrisy and undermine the ability to persuade. When free speech is suppressed, we are unable to know who other people really are and thus will never be able to enter into genuine discussion and debate.

Ironically, speech code activism ignores the fact that social progress often depends on free speech. Many of the ideas that most Americans cherish—such as gender and ethnic equality—were once considered offensive. But they are no longer considered offensive precisely because courageous American citizens were allowed to display the merits of those ideas in public discussion and debate.

Finally, for Americans who are religious believers, obeisance to today’s speech codes increases the likelihood that we will one day be less free to share our most deeply held beliefs. We want to be free not only to speak about God’s creational design for humanity to live in harmony as men and women, but also to tell our fellow citizens about who God is even if they find it offensive.

There is a reason James Madison put religious liberty and freedom of speech at the top of the Bill of Rights. When they are threatened, every other freedom is threatened as well.

In other words, if Americans do not push back effectively against attempts to restrict speech and suppress religious exercise, any one of us—Christian or atheist, conservative or liberal, male, female, heterosexual, or LGBT—might one day find ourselves in a situation in which the state punishes us for living according to our beliefs and values.