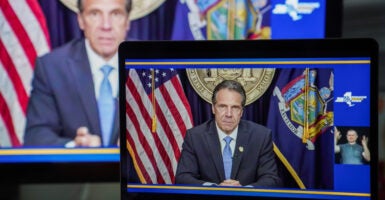 Andrew Cuomo left the New York governor’s mansion in disgrace this week after multiple controversies, including his poor handling of the COVID-19 pandemic as well as credible allegations that he sexually harassed 11 female state employees.

Cuomo, who was in his third term, resigned before facing near-certain impeachment in the New York State Assembly and a likely humiliating removal after a trial held by members of the state Senate and judiciary.

However, throughout U.S. history, other governors chose to stay and fight—sometimes with success, such as the legendary Louisiana Gov. Huey Long, and sometimes not, such as Illinois Gov. Rod Blagojevich.

The first governors of Nebraska and Kansas both were impeached. In the 1920s, Oklahoma saw two governors impeached and removed. In Cuomo’s state of New York, one governor has been impeached and ousted from office: William Sulzer in 1913.

On today’s episode of “The Daily Signal Podcast,” we talk about the nation’s 15 impeached governors going back to the very first in 1862, when the country itself was at war.