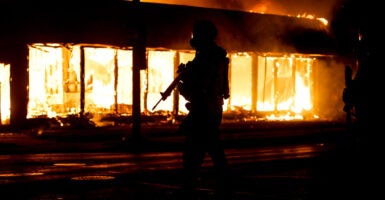 Wisconsin Gov. Tony Evers initially rejected President Donald Trump's offer of assistance from federal law enforcement to quell violence in Kenosha, in what clearly was an act of political pettiness. Pictured: A police officer is silhouetted by a burning building last Aug. 24 as rioters loot, vandalize, and set fires in Kenosha. (Photo: Joshua Lott for The Washington Post/Getty Images)

MADISON, Wis.—The people of riot-ravaged Kenosha were pleading for help from Gov. Tony Evers with each passing day of chaos and destruction.

When Wisconsin’s Democrat governor finally did act, the help he sent was too little and much too late.

Emails from the nightmarish riots late last August paint a picture of a disconnected executive as large sections of Kenosha burned.

An email obtained by Empower Wisconsin in an unrelated open records request to the governor’s office shows that a top aide to U.S. Sen. Ron Johnson, R-Wis., effectively told Evers’ top aide to wake up and smell the smoke.

“They’re really scared and reporting that police are standing down and letting the rioters destroy and take over,” Leschke wrote.

Leschke asked the same question that Kenosha city and county officials had been asking for three days.

“Will you be talking about steps the governor will be taking? Will he accept the president’s offer to help?” Johnson’s chief of staff wrote to her counterpart in the governor’s office.

Evers was slow to deploy the National Guard, and he failed to provide adequate support when he eventually consented. And Evers initially rejected federal law enforcement assistance from then-President Donald Trump, in what clearly was an act of political pettiness.

Scores of businesses, government buildings, and homes in Kenosha’s Uptown and Downtown districts were smashed, looted, and set on fire, many burning to the ground. The riots, which grew out of protests following the police shooting of Jacob Blake, a black man who repeatedly resisted arrest, left Kenosha businesses with a $50 million bill.

Evers’ press office did not respond to Empower Wisconsin’s request for comment on this report.

Evers certainly seemed uninterested in the urgent requests from Johnson, U.S. Rep. Bryan Steil, R-Wis., and other lawmakers on Tuesday, Aug. 25, what turned out to be a deadly day in the Kenosha riots.

“After another night of violence and destruction, I again ask for demonstrators to remain peaceful and also call on elected officials charged with the responsibility to maintain safety and security in Wisconsin to devote the manpower to do so,” Johnson tweeted that morning.

On the same day, the Kenosha County Board of Supervisors sent a letter to Evers urging the governor to deploy an additional 2,000 National Guard members to protect the city. He sent 250.

The next day, after two rioters were killed and another injured, the county board sent another letter to the governor, again seeking backup.

In a public statement, Johnson said:

Governor Evers incited the Kenosha rioters when he issued a grossly irresponsible press release before he knew the facts stating, ‘While we do not have all of the details yet, what we know for certain is that he is not the first black man or person to have been shot or injured or mercilessly killed at the hands of individuals in law enforcement in our state or our country.

He compounded his incitement by refusing to accept President Trump’s offer to immediately send a sufficient number of [federal law enforcement forces] to end the rioting. The press refuses to hold him accountable for his actions that exacerbated the riots.