Kenosha Merchants, Their Businesses in Ruins, Ponder What Healing Looks Like 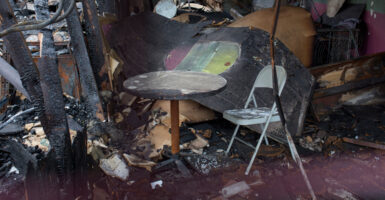 Left out of much of the reporting on the rioting and looting in Kenosha, Wisconsin, is the fact that the Uptown neighborhood is diverse:, with black, white, Hispanic, and Asian merchants and residents. Pictured: A burned-out Uptown store front as seen Tuesday. (Photo: Andrew Lichtenstein/Corbis via Getty Images)

MADISON, Wis.—Eric Oertle spent part of Sunday reviewing security video from the night his life came crashing down. It was all he could do to keep from crying.

He says he was “sick to death” to see what was on the video. Each frame was more devastating than the last.

The footage shows looters smashing the windows of Computer Adventure, the sales and service store on a corner lot that Oertle and his wife, Pat, started more than 30 years ago in the Uptown neighborhood of Kenosha, Wisconsin.

It was 10:55 p.m. on Monday, Aug. 24, the second day of “civil unrest” following a Kenosha police officer’s shooting of Jacob Blake, a 29-year-old black man whom police said they were attempting to arrest in connection with a domestic incident.

“They came in with baseball bats, smashed our glass cases, stole everything they could, or smashed what they didn’t steal,” Oertle recalls of the looters. “They were going to set fire to the building like they did across the street from us, until the upstairs tenants in the apartments above us came running down the stairs and stopped them. They said, ‘We live here.’”

Despite the damage, the 71-year-old business owner says, he and his wife are among “the lucky ones.”

Theirs was the only building on the block standing after four days of riots that left millions of dollars in damage, two dead, several others wounded or injured, and Wisconsin’s fourth-largest city wondering how on earth it will heal from so much anger, so much rage, so much destruction.

Oertle surveys the damage in the city he loves, in a neighborhood where everybody waves to each other.

B and L Office Furniture—looted and burned. Boost Mobile—the same. La Estrella Supermarket and Uptown Restaurant also were on the same business strip that went up in flames.

Gone, too, is the iconic Danish Brotherhood Lodge, a Kenosha fixture for more than a century. Famous for its Danish breakfasts, bingo nights, and Santa’s annual visits, the lodge was leveled by looters and flames.

Private property cost estimates have yet to be tallied, but damage to city property alone from the rioting was quickly approaching $2 million, city officials told the Kenosha News. President Donald Trump visited the city Tuesday, pledging millions of dollars in federal aid for Kenosha and law enforcement efforts statewide.

The stories of personal loss are heartbreaking.

Zaydi Tejada, the daughter of the owners of Uptown Restaurant and La Estrella Supermarket, says she and her family will have to start from scratch.

“We love the community and are very devastated about this, we love serving you with great food and frankly cannot see our life without you guys in it,” Tejada wrote on a GoFundMe page.

Alice Lee’s parents came to the United States from South Korea in the 1980s. Her father has owned Uptown Beauty, a beauty supply store, for 25 years.

“He’s worked so hard to build it up—working on holidays, day in and day out, getting to know his customers and them calling him ‘Lee,’” she wrote on an online fundraising page.

“He loved and cared for that store and I’m honestly so devastated, I know my parents must be, too.”

Then there are the many families displaced by the destruction. Kenosha resident Nicole Tomsich says the apartment where her granddaughters lived is part of the riot’s ruins.

“They lost everything, including their two kittens who unfortunately were unable to be saved,” Tomsich wrote on a GoFundMe page. “Among those displaced were my two grandchildren, their mother and father and their other grandmother.”

“They literally lost everything,” she added. “They will need to find a new home immediately and they need all the essentials. Furniture, bedding, a crib, beds, clothing, shoes, winter apparels, anything you could possibly think of.”

Left out of much of the reporting—between Black Lives Matter protesters’ cries of police brutality and racial injustice, the pandering of politicians, and the erosion of public safety—is the fact that Uptown long has been a diverse neighborhood. Its denizens are black, white, Hispanic, Asian. Its stores serve a lot of people who don’t have the means to travel elsewhere.

“This is where they come to shop,” Oertle, the computer store owner, says. “They have now lost all of their grocery stores, their clothing stores, their hairdresser. They’ve lost their bars, their restaurants. This business district is destroyed permanently.”

Across the street from Computer Adventure, the entire block of stores is gone. Beyond repair. The buildings will have to be demolished.

That’s what’s so hard for Oertle and others to understand: If black lives truly matter, why are some of those advocating that idea destroying black-owned businesses and the places where black people shop?

“They have destroyed black lives, Hispanic lives, white lives, in the name of what? In the name of justice? This is insanity,” Oertle says.

What may be a sliver of consolation is that many of those that did so much damage in Kenosha aren’t from Kenosha.

Police report that more than 100 of the 175 arrested in connection with the riots live outside the city. They say 69 arrests were for curfew violations, and another 34 were on charges such as carrying concealed weapons, possessing a controlled substance, and destroying property. Law enforcement also seized more than 20 weapons.

Among the arrests was Kyle Rittenhouse, the 17-year-old from Antioch, Illinois, who is charged with five felonies after police say he shot three men on the third night of the riots, two of them fatally.

Rittenhouse, who had dreams of being a cop, reportedly drove to nearby Kenosha, not far from the Illinois border, to help protect businesses.

The first people to help them clean up, Uptown merchants say, were the same ones who always have been there: their neighbors.

‘Could Have Been Prevented’

In the aftermath of this man-made disaster, a lot of questions remain.

Why didn’t the Democratic governor send in enough members of the Wisconsin Army National Guard help police secure the city?

Evers seemed to lay the blame on local officials.

“The people on the ground here in Kenosha asked us for x. We provided x. The next day they asked for y, and we provided y,” Evers said at a press conference in Kenosha four days after the riots began.

The governor’s critics, particularly members of Wisconsin’s Republican-led Legislature, blame him for firing off incendiary tweets attacking law enforcement soon after a Kenosha police officer fired seven times at Blake, seriously wounding him as he leaned inside the driver’s-side door of his sport utility vehicle.

Police said Blake resisted arrest multiple times before he began to get into the SUV, where three of his five children waited.

“Two people are dead. Another was shot. This violence could have been prevented,” state Sen. Van Wanggaard, R-Racine, wrote Wednesday in a letter to the governor.

“Last night, the Kenosha County Board of Supervisors asked for an additional 1,500 National Guard members for Kenosha tonight,” Wanggaard wrote. “I second that request and implore you to fulfill it. Without massive resources, violence will only escalate.”

“Neither one of them was doing their job, not even close,” the businessman says. “These are people that should not be in office.”

A week after the Kenosha riots, the city and its people are left to deal with the damage. Much work lies ahead.

The fear of more destruction still has many in Kenosha on edge. There’s a kind of paralysis that has set in, as business owners such as Oertle wait for the other shoe to drop.

“Until we know everything is settled down, we’re not going to start replacing glass. It would be ludicrous, knowing it come right back tomorrow,” he says. “It could be weeks, months before we feel safe enough to start.”

The damage is particularly daunting to those who have spent their lives building their businesses. What now, they ask?