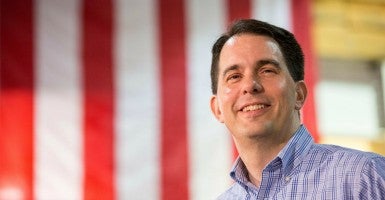 AMHERST, N.H.—During his first trip to New Hampshire since the launch of his presidential campaign, Wisconsin Gov. Scott Walker outlined his resume as a conservative governor of a blue state, including lowering taxes, reducing regulations, and cutting funding for Planned Parenthood.

“We defunded Planned Parenthood, which is particularly important these days in light of what we’ve seen on video,” Walker said during a campaign stop at Joey’s Diner.

Walker was referencing an undercover video released on Tuesday by the Center for Medical Progress showing Planned Parenthood’s senior director of medical services, Dr. Deborah Nucatola, discussing the sale of fetal organs such as hearts, lungs and livers at affiliates of the nation’s largest abortion provider. Wisconsin Gov. Scott Walker, a Republican presidential candidate, stands on the back of a pickup truck to address an overflow crowd outside his campaign stop in Amherst, N.H. (Photo: Kate Scanlon/The Daily Signal)

Walker also discussed his battle with unions during his efforts to pass right-to-work legislation.

“In Wisconsin, we took on the big government union bosses and we won,” Walker said.

He called “out of control” federal regulations a “wet blanket on the nation’s economy.”

“We can help people find careers, not just jobs, careers that pay far more than the minimum wage,” Walker said. “Let the other side argue how low wages are, we’re going to figure out a way we can help lift everyone up to live their piece of the American dream.”

“True freedom and prosperity do not come from the mighty hand of the government,” Walker continued. “They come from empowering people to live their own lives and control their own destinies with the dignity that comes from work.”

Walker said that as president, he would work to overturn President Obama’s diplomatic deal with Iran and would reinstate the “sanctions approved by the Congress.”