I’m a Teacher. Parents Should Know That School Districts Hide an Ideology of ‘Unlimited’ Gender. 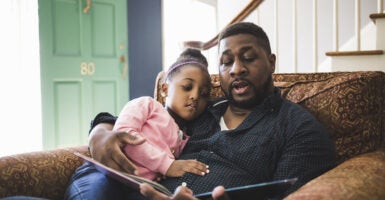 It’s time to bring parents and other taxpayers up to speed on school districts' new terms and definitions for "expanding" gender identities and "evolving" sexual orientations. (Photo: The Good Brigade/Getty Images)

And as a former school board member, I believe transparency to taxpayers, who fund public education, is obligatory.

Unfortunately, authorities in public school districts in charge of pre-K through grade 12 have been slow to disclose to parents and taxpayers their new terms and definitions for “expanding” gender identities and “evolving” sexual orientations.

It’s time to bring them up to speed.

In California, this document matters because the state’s Health Education Framework, adopted in May 2019 by the state board of education, recommends Advocates for Youth as a resource for teachers and students. That includes its free, online sex education curriculum, 3Rs (“Rights, Respect, and Responsibility”).

“National Sex Ed Standards” defines gender, which it takes to encompass biological sex, as a social construct. Therefore, it’s possible to reject or modify one’s “sex assigned at birth” and develop something that feels truer to oneself (Page 58).

Examples of “gender” include—but are not limited to—male, female, transgender, androgynous, agender, gender expansive, genderqueer, nonbinary, two-spirit, intersex, or questioning. “Genderqueer” means a person may identity as both genders, neither gender, something in-between, or beyond genders (Pages 59, 61, 67).

To understand the rest of this document, it’s vital to grasp how it subordinates the biological reality of sex to trendy, relativist, gender ideology.

Such relativism applies even to the document itself, which informs readers (Page 8) that language continually evolves regarding gender, gender identity, and gender expression. So the document is only a snapshot in an evolutionary process.

According to “National Sex Ed Standards,” students in grades K-2 should be taught to respect not all boys and girls, but “all genders” (Page 18).

In grades 3 to 5, teachers should inform students about puberty blockers (Page 20). The standards define the medical refusal to administer puberty-blocking drugs and other similar treatments to minors as gender-based violence (page 60).

Students are taught that they decide their identities through experiential cycles where they learn by doing, reflecting, interpreting, and exploring (Page 58).

“National Sex Ed Standards” calls the right to choose one’s gender “sexual agency” (Page 64). It considers anyone who fails to affirm a student’s self-determined gender as prejudicial or transphobic (Pages 60, 67).  This “sexism” or “discrimination” (Page 64), it claims, causes individual or systemic trauma (Page 67).

The standards redefine “transgender” to be an umbrella term encompassing a large number of gender identities (Page 66).

1. What’s the empirical evidence for this idea of unlimited genders, or for the ideology on which it’s based?

“National Sex Ed Standards” doesn’t bother to answer this question, and for an obvious reason. According to the new definition in the glossary (Page 58), a claim is a “fact” if most of the official “experts” in the field agree.

And it should be no surprise that the self-appointed experts at the National Association for the Education of Young Children, which helped create California’s Master Plan for Early Learning and Care, claim that current science views gender identity as fluid and expansive.

2. Who are these “experts in the field” who deign to obliterate the distinction between male and female previously recognized by every culture?

Well, in California, that task seemed to fall to the Department of Fair Employment and Housing. In July 2017, the state agency changed the legal definition of gender identity to mean male, female, both, neither, gender nonconforming, or transgender.

Officials recently changed the legal definition of “transgender” to mean a general or umbrella term of a person whose gender identity differs from that person’s “sex assigned at birth.”

3. Why didn’t so-called mainstream news report this major definition change about gender over three years ago?

I don’t know. It was not for lack of trying on my part.

The California School Boards Association has yet to tell school board members, who make policy decisions in their school districts. Intentionally withholding information should be a red flag.

Equality California lobbied for the new definition through the Department of Fair Employment and Housing. Other “experts in the field” that endorse unlimited or expansive gender identities include:

—National Association for the Education of Young Children

—Centers for Disease Control and Prevention

—Society of Health and Physical Educators

4. Does that mean that all professionals associated with these groups agree with a gender ideology that dissolves biological sex differences in a swirling, expansive sea of gender identities?

As a former member of the California Teachers Association, the state’s biggest teachers union, I don’t agree. And no doubt many professionals simply don’t know how their organizations are representing them on this issue.

It’s time for educators, medical professionals, and taxpayers who reject this radical ideology to speak up.