Black Lives Matter Comes Out in Support of Cuban Regime, Blames America for Its Problems 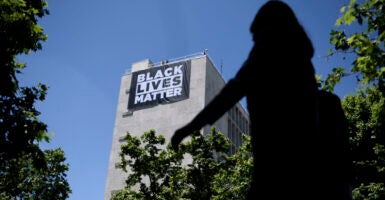 A person walks past the U.S. Embassy in Spain where a banner was hung in support of Black Lives Matter, on May 25 in Madrid. (Photo: Oscar Cañas/Europa Press/Getty Images)

That’s the message of the Black Lives Matter Global Network Foundation, one of the largest BLM organizations in the country.

In a statement on its official Instagram account on Wednesday, Black Lives Matter castigated the United States for causing Cuba’s current economic and health care crisis.

It then said that the embargo was “instituted with the explicit intention of destabilizing the country and undermining Cubans’ right to choose their own government.”

The U.S. didn’t ruin Cuba, communism did. The communists who’ve been in control of the country since 1959 are experts in inhumanity.

And “right to choose” their own government is a laughable statement given that Cuba’s system is totalitarian and that protests in the country are being ruthlessly cracked down on by the regime.

So much for opposition to police brutality.

The message continued to say that “the people of Cuba are being punished by the U.S. government because the country has maintained its commitment to sovereignty and self-determination. United States leaders have tried to crush this Revolution for decades.”

In communist Cuba, no lives matter, except for those in the ruling regime. The “equality” that exists in that country is due to almost everyone being wretchedly poor.

The statement was certainly revealing. Many responded to its absurdity on social media.

That Black Lives Matter backs the tyrannical communist government in Cuba is par for the course. It also recently came out against Israel and sided with Hamas as it began lobbing missiles at Israelis in May.

Its ties to outright Marxism are even stronger.

After all, one of the organization’s co-founders once described herself as a “trained Marxist.”

It also put out this Tweet after the death of Cuban dictator Fidel Castro in 2016.

So, is it really a surprise that an organization co-founded by a “trained Marxist” is Marxist?

It is according to The New York Times.

In 2020, the Times insisted that there were no connections between Black Lives Matter and Marxism, that it was nothing but a conservative conspiracy.

“Conservative attempts to tie Black Lives Matter to communist groups are years old, and have included digging up a statement from one of the movement’s early leaders claiming that several of them were ‘trained Marxists,’” the New York Times said. “But there is no indication that today’s Black Lives Matter movement has any formal link to Marxism, or to the Chinese Communist Party.”

Does that seem too convincing after this statement about Cuba?

Now supporting the phrase “black lives matter” and the organization can certainly be two separate things.

It’s hard to imagine that all the suburbanites with Black Lives Matter lawn signs support a revolution of the proletariat to overthrow the bourgeoisie.

Still, this hasn’t prevented tens of millions of dollars from pouring into an organization that supports communist dictatorships while bashing the United States.

The Black Lives Matter Global Network Foundation made over $90 million in fundraising in 2020 according to The Associated Press. This is not just a small-time operation, but a massive one with influence and power.

Many Americans are simply unaware of what they are supporting. And if they are aware, that’s noteworthy too.

My colleague at The Heritage Foundation, Mike Gonzalez, has covered the links between the Black Lives Matter movement and Marxism quite extensively. His new book on the topic, “BLM: The Making of a New Marxist Revolution,” is set for release in September and is sure to be an enlightening read.

As we’ve seen with the revolt against critical race theory in K-12 schools, information is the first step to undoing the harm of radical ideologies.

With its statement about Cuba, Black Lives Matter has revealed itself to be on the side of tyrants and an evil ideology that has destroyed the property, liberty, and lives of millions of people of all races around the globe.