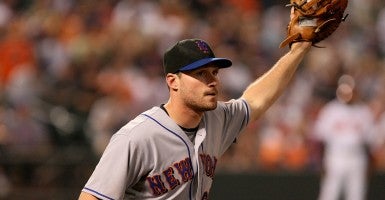 Daniel Murphy, second basemen for the New York Mets, decided that skipping the first two games of the regular season to witness the birth of his son was more important than being on the field. He defended that decision yesterday when he spoke at the White House Working Families Summit:

When Noah asks me one day, ‘What happened? What was it like when I was born?’ I could have answered ‘Well, Stephen Strasburg hung me a breaking ball that day, son, and I slammed it into the right-field corner.’ But I think it’s going to go so much further in that I’m the one who cut his umbilical cord. And long after they tell me that I’m not good enough to play professional baseball anymore, I’ll be a father. And I’ll be a husband. So that was a reason on the front end that I wanted to be there for my wife and for my son.

Some in the the New York media criticized Murphy for missing the games. Sports radio host Mike Francesa griped, “You’re a Major League Baseball player. You can hire a nurse to take care of the baby if your wife needs help.”

But Murphy said his teammates and manager were all supportive of his decision to take advantage of a relatively new baseball rule that allows players to go on paternity leave for three days.

“We try to take Jesus Christ and we try to put him in the center of everything,” Murphy said. “So instead of OK, I’m a father; I’m a husband; I’m a baseball player, I just try to take Jesus, put him right in the middle.”

Murphy is not the first player to miss games for family reasons. In 1987, Mark McGwire set the rookie record for home runs with 49. But he missed the last two games of the season—and  chance for an even 50 home runs—to witness the birth of his first child. In 1965, Dodgers ace Sandy Koufax opted not to pitch the first game of the 1965 World Series to observe the Jewish high holiday of Yom Kippur.

The Dodgers won the 1965 World Series against the Twins, Mark McGwire had a long, celebrated career that has since been mired in controversy, and based on his performance, Daniel Murphy is on pace to have a standout year.