The Capital Gazette Published as Promised, but It Was the Nearly Blank Page That Was Particularly Heartbreaking 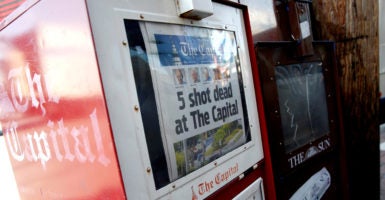 A copy of the Capital Gazette is displayed in a newspaper box on June 29, the day after a gunman killed five people and injured several others at the publication's offices in Annapolis, Maryland. (Photo: Joshua Roberts/Reuters/Newscom)

The Capital Gazette published a paper the day after a gunman killed five of its staffers, but one nearly blank page was particularly heartbreaking.

The suspect, Jarrod Warren Ramos, opened fire on the Annapolis, Maryland, newspaper Thursday afternoon with a “long gun,” killing five and injuring several others in a tragic event recognized as a the largest mass shooting of journalists in America.

As the reporters and editors grieved, they remained undeterred in their mission to report the news.

I can tell you this: We are putting out a damn paper tomorrow.

As promised, the Capital Gazette came out Friday.

But, one page—the opinion section—was left almost completely blank. It simply said, “Today, we are speechless.”

The names of the five victims—Rebecca Smith, John McNamara, Gerald Fischman, Robert Hiaasen, and Wendi Winters—were listed below a sentence explaining that the page was “intentionally left blank” to “commemorate” the victims of Thursday’s shooting.

Beneath the list of the victims was the following note: “Tomorrow this page will return to its steady purpose of offering our readers informed opinion about the world around them, that they might be better citizens.”

“[Capital Gazette] reporters [and] editors give all they have every day,” Capital editor Jimmy DeButts wrote on Twitter. “There are no 40 hour weeks, no big paydays – just a passion for telling stories from our [community].” Capital Gazette reporters actually published a story on the shooting on their digital platform as details unfolded Thursday.

Ramos, who has had a long-standing grudge against the Annapolis paper, was arrested and charged with five counts of first-degree murder, according to The Baltimore Sun, which owns the Capital Gazette.

Phil Davis, a Capital Gazette crime reporter, told The Baltimore Sun that the shooting “was like a war zone,” a horrific scene that would be “hard to describe for a while.”