Why Black Lives Matter Sides With Hamas Against Israel 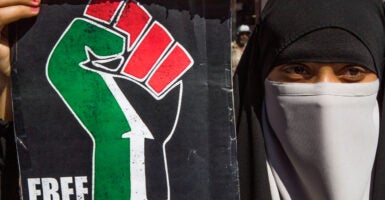 Israel has become a deep gash for progressives. While the far-left wing falsely accuses the Jewish state of human rights violations, a dwindling, less irrational rump tries to hedge continued support for our democratic ally with restrictions limiting Israel’s ability to defend itself.

What some consider to be the fourth mini-war since 2008 between the state of Israel and Hamas started weeks ago when Hamas resumed lobbing missiles into nearby Israel.

Even though the U.S. State Department has designated Hamas as a terrorist group, it should surprise absolutely nobody that the main Black Lives Matter organization, a group founded and led by Marxists, is taking the side of Hamas in the current troubles.

The main BLM group, the Black Lives Matter Global Network Foundation, supports a primary objective of Hamas: the annihilation of the Jewish state. On its official Twitter page, the group proclaimed:

Black Lives Matter stands in solidarity with Palestinians. We are a movement committed to ending settler colonialism in all forms and will continue to advocate for Palestinian liberation. (always have. And always will be). #freepalestine

The New York Post quickly reported on BLM’s support for the terrorists in the current conflict, pointing out there is nothing new in this. Virtually since its founding in July 2013, after the acquittal of George Zimmerman, the half-Peruvian man who shot Trayvon Martin, BLM has been anti-Israel.

Almost exactly two years after its founding, one of its three main founders, Patrisse Cullors, demonized Israel while touring the country.

President Joe Biden spoke the truth when he said on Friday, “The United States fully supports Israel’s right to defend itself, against indiscriminate rocket attacks from Hamas, and other Gaza-based terrorist groups that have taken the lives of innocent civilians in Israel.”

The hard left of his party, however, agrees with BLM. Rep. Ilan Omar, a Muslim who represents a Minnesota district, joined with another Muslim, Rep. Rashida Tlaib of Michigan, and Rep. Andre Carson of Indiana to issue a statement saying that the “Israeli government plans to move forward with forced evictions in the predominantly Palestinian East Jerusalem neighborhood of Sheikh Jarrah” were “in direct violation of international law, the Geneva Convention, and basic human rights.”

This statement grotesquely twisted the facts—fanning the flames of antisemitism while in actuality denying the rights of Jews to lawfully possess property in their own homeland.

So we must ask: What about the long-standing Arab-Israeli government has made the American left, which has BLM at the forefront, take sides against one of America’s staunchest allies?

Some clues, though not all, can be found in BLM’s tweet.

By “settler colonialism,” the Black Lives Matter Global Network Foundation was alluding to a concept from global social theory, a subset of the critical theory that underpins all the woke movements.

According to globalsocialtheory.org, settler colonialism “is a distinct type of colonialism that functions through the replacement of indigenous populations with an invasive settler society that, over time, develops a distinctive identity and sovereignty. Settler colonial states include Canada, the United States, Australia, and South Africa, and settler colonial theory has been important to understanding conflicts in places like Israel, Kenya, and Argentina.”

As with many of these concepts, this one dissolves upon scrutiny. What makes Canada a settler colonial state, but keeps mostly white Argentina at length? Or why not Cuba, where the Spaniards almost completely replaced the Tainos they found in but a few decades? Or, for that matter, why not identify the Tainos themselves as a settler culture, since they replaced the Guanahatabeyes when they arrived from South America a couple of hundred years before the 1511 conquest of Cuba by Spain?

Are Anglo-Saxons a settler culture that pushed the native Celts west and north in the British Isles in the 400s? Or the Visigoths, who did the same to the Romanized Celt-Iberians of Spain around the same time period? Or, how about the Sudanese empire of Mali in the 1250s?

It seems that “settler state,” a term found everywhere in the BLM lexicon, just describes the entire world and its history of cruel invasions. And it is a particularly poor explainer of the founding of the Jewish state in the historic land of the Jews, on the heels of the Holocaust.

Anyone who has studied BLM (and I am publishing a book on this movement in September) will know that its animus is against Western culture, which it wants to dismantle—not the long history of invasion, of which it appears to know little.

The heart of the West is Christianity, and Judaism is at the heart of Christianity. Christ was a practicing Jew, as were Mary, Joseph, and likely all the apostles, who worshipped at the Jewish temple along with Jesus. Anyone who truly wants to dismantle the West, to “problematize” it in critical race theory lingo, will want to start there first.

Israel is not fighting the Palestinian National Authority in the West Bank; Israel’s battle today is with Hamas. By siding against Israel, BLM is siding with Hamas. Saying that has become as controversial as saying that BLM is Marxist, but only because the press corps is intent on covering for BLM. Both statements are true.

The reasons BLM takes the side of Hamas, however, may have little to do with postcolonialism, and much more to do with its desire to bring down the United States and the entire West.

This piece was originally published by the Disenso Foundation.