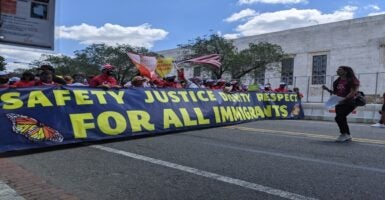 “What do we want?” yelled a protest organizer, in Spanish. “Amnesty!” the crowd responded.

That was the scene June 24 as a large group of pro-amnesty demonstrators marched across Washington, D.C., under a “We Can’t Wait” banner, attempting to get President Joe Biden to “keep his promise” to legalize all immigrants in the country illegally—thankfully, something that he cannot do without the consent of Congress.

The march occurred against the backdrop of an ever-worsening border crisis, in which even left-leaning CNN was forced to report that more than a million illegal migrants were taken into custody at the southern border since last October.

The migrants are being spurred on by Biden, who promised to reverse course on the successful elements of President Donald Trump’s administration’s immigration-control policies and to set about legalizing millions of illegal immigrants.

As one of the marchers, Analaura Garcia, explained as to why she took part: “We came here today because Biden promised that when he became president, he would pass comprehensive immigration reform.” In short, amnesty.

Biden’s promises were followed by disastrous actions. First, the administration stopped deporting illegal immigrants and reinstated “catch and release” programs, allowing rampant entry of migrants into the interior of the country.

Then, to appear more humane, the Biden administration announced it would allow unaccompanied minors to enter the country.

All of these decisions resulted in a massive rush of migrants to the border—and in renewed calls on the left to provide amnesty for those already living in the country illegally.

CASA was of one of the largest groups represented at the march. In an interview, CASA Executive Director Gustavo Torres explained why he thought now was the best moment to push for mass legalization.

“In this moment, the people who have the power are the Democrats. They control the House, the Senate, and the White House. We are demanding to them, because they need to deliver,” Torres said.

Eventually, the crowd made it down to the National Mall, where it heard a number of speeches and musical performances. Among the speakers was Sen. Bernie Sanders, I-Vt., who expressed his support for granting citizenship to illegal immigrants.

“This is a pivotal moment in history for all of us to stand together, black and white, Latino, Native American, Asian American,” Sanders said. “All of us have got to stand together and tell the billionaire class that our time is now. We won’t wait.”

Those are calls to action the Biden administration is all too willing to answer. Take the U.S. Citizenship Act of 2021, Biden’s Day One immigration proposal. This radical piece of legislation is a laundry list of bad policies that caters to illegal immigrants at the expense of legal immigrants who’ve gone through the proper process and American citizens alike.

According to a report published by The Heritage Foundation, Biden’s legislation would give millions of illegal immigrants who lived in the U.S. before Jan. 1 “lawful prospective immigrant” status, work authorization, and a Social Security number for six years with unlimited additional six-year term extensions. (The Daily Signal is the news outlet of The Heritage Foundation.)

Additionally, the bill would expand the Deferred Action for Childhood Arrivals program by providing green cards to anyone who entered the U.S. illegally before turning 18 years old, as well as to anyone who performed agricultural work for 400 workdays within five previous years.

Experts at The Heritage Foundation have reported that an estimated 50% to 70% of agricultural workers are illegal immigrants.

By rewarding migrants for crossing the border illegally, that behavior is encouraged to continue. No matter how well-intentioned these proposals are, they are demonstrably creating a crisis at our southern border.

That crisis then results in “lost jobs, lower wages, overcrowded schools, and overburdened public services” for American citizens and for the immigrants who took the time and effort to come to the country the right way.

Instead of demanding blanket amnesty, the protesters would be better served by demanding that officials in Washington actually enforce America’s immigration laws and secure our border.

Endless amnesties only reinforce the idea that the rule of law doesn’t matter in America, and they result in a worse country for everyone.

Immigrants form an important part of American life, but they must follow the proper protocols to become citizens. To do otherwise is to disrespect all those who took the long, legal path to make America their home.