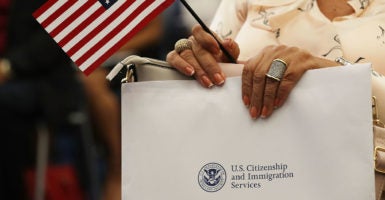 We can’t think of a better example of how not to roll out a policy than what happened last week when the U.S. Citizenship and Immigration Services published an alert regarding the citizenship of children born overseas.

The way the policy was rolled out led many to believe that the Trump administration was ending birthright citizenship for children born to U.S. citizens stationed overseas, which naturally would have been a big deal.

It did no such thing.

Rather than briefing stakeholders and the media before the rollout, or explaining how the policy would work once in force, or even publishing “frequently asked questions” along with the policy—all standard ways to roll out new policies—U.S. Citizenship and Immigration Services just published a poorly written policy change that caused an immediate firestorm.

The backlash was so quick and aggressive that U.S. Citizenship and Immigration Services acting Director Ken Cuccinelli issued a statement the same day saying:

This policy update does not affect who is born a U.S. citizen, period. This only affects children who were born outside the United States and were not U.S. citizens. This does NOT impact birthright citizenship. This policy update does not deny citizenship to the children of US government employees or members of the military born abroad. This policy aligns USCIS’ process with the Department of State’s procedure, that’s it.

Cuccinelli even went on a popular Washington, D.C., morning radio show to explain what the policy did, and more importantly, did not do.

But it was too late.

Senior leaders in the military, State Department, and elsewhere started asking questions and demanding answers. Speaker of the House Nancy Pelosi even tweeted that the Trump administration was ending birthright citizenship for U.S. citizens stationed overseas.

In an attempt to get back control of the narrative, U.S. Citizenship and Immigration Services also published an update designed to clarify the policy and a flowchart that identifies whom the policy applies to.

But by then, the damage had been done.

When you read the policy alert, you can see that Cuccinelli is correct; the policy is, in fact, rather mundane.

The policy doesn’t deal with birthright citizenship. Children born overseas to U.S. citizens stationed overseas, whether they are civilian government employees, in the U.S. armed forces, or just living or working overseas, are U.S. citizens at birth. Period.

This policy affects a much smaller group of children, namely, those children adopted overseas, children born to non-U.S. citizens, and children born to one or more U.S. citizens who do not meet certain residency or physical presence requirements needed to transfer birthright citizenship.

What it does is bring the definition of the term “residence,” as applied by the U.S. Citizenship and Immigration Services, into compliance with the way that term is defined in the Immigration and Nationality Act.

This means that children who did not automatically acquire citizenship at birth are not considered to be “residing” in the U.S. just because their parents are citizens. Thus, as of Oct. 29, parents of noncitizen children born or adopted abroad must now apply for citizenship for their children, and use the correct government form.

According to immigration officials interviewed by Military Times, the policy affects only about 20 to 25 families a year. Cuccinelli said on the radio that it would affect about 100 people a year.

Only time will tell how few people it affects.

This whole rollout fiasco could and should have been avoided.

By failing to adhere to proven modes of policy rollouts, the U.S. Citizenship and Immigration Services caused temporary panic to scores of U.S. military and civilian personnel, including, no doubt, some who were considering being stationed overseas.

It forced the department to scramble to clarify what the policy actually did, and required the Defense Department, the State Department, and other relevant government employees to drop everything so they could understand and then explain the policy to their superiors.

U.S. Citizenship and Immigration Services should have made the policy clear from the get-go.

We assume the next policy rollout from U.S. Citizenship and Immigration Services will go better.