Why Congress Should Reject Amnesty for Illegal Agricultural Workers 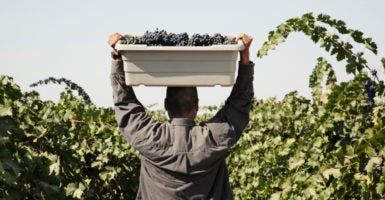 The House just passed a massive amnesty bill that would give millions of illegal agricultural workers and their spouses and children a pathway to citizenship.

Proponents of the legislation, known as the Farm Workforce Modernization Act, try to use concerns for farmers and agricultural labor shortages as a pretext for what is first and foremost one of the most extreme illegal immigration bills in recent memory.

Let’s assume for the sake of argument that agricultural labor shortages need to be addressed through the immigration system. Then logically, legislation would focus on how to improve legal pathways for aliens seeking to come to the United States for agricultural work, such as by fixing the H-2A temporary agricultural worker program.

But the bill, through its amnesty provisions, unnecessarily goes way beyond this.

It’s important to recognize that the amnesty provisions are so extreme that they don’t simply allow these illegal workers to change to H-2A status like legal agricultural workers currently in the country. No, they actually get a lot more than that through this special pathway.

Certified agricultural workers can easily renew this special new status on an indefinite basis. They are also eligible to be lawful permanent residents (i.e., get their green cards) in a fairly quick manner.

To clarify, this doesn’t mean the law requires 14 or 18 years of additional work in agriculture. It only requires four or eight more years of working in agriculture. Then, the illegal agricultural workers can get their green cards and, under existing law, these lawful permanent residents can generally become citizens after five years.

As many of these agricultural workers move to lawful permanent resident status and then to citizenship, there’s no reason to think they would simply continue to work as farmworkers.

This amnesty plan, which allegedly exists in part to help farmers with their labor needs, would likely have only a limited short-term benefit to farmers as existing workers move off the farm to work in other occupations and in different areas of the country.

This movement away from the farm is precisely what happened when the United States granted amnesty to more than 1 million agricultural workers in 1986.

The sheer scope of this proposed amnesty would be massive. An estimated 50% to 70% of U.S. farmworkers are in the country illegally. There are likely at least 1.5 million illegal agricultural workers, with estimates above 2 million. This doesn’t even include the spouses and children who would get amnesty as well.

This entire plan rewards those individuals who have illegally come into the country and the agricultural employers who have employed them. There’s also nothing that would do more harm to legal immigration reform than this amnesty, which threatens the legal immigration system’s legitimacy and reason for existing.

There should be a thoughtful discussion and debate about legal immigration reform, including labor issues within the agricultural sector. The solution is to solve the problems with our laws, not to pass an amnesty law that would bless the actions of aliens and agricultural employers who have ignored the law altogether.