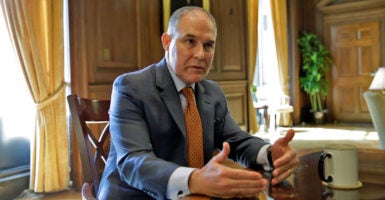 When environmental pressure groups can promote their agendas through closed-door rule-making with the Environmental Protection Agency, something has gone seriously wrong with the regulatory process.

This is precisely what has been happening at federal agencies in recent years—but not for much longer at the EPA. On Monday, EPA Administrator Scott Pruitt issued a directive to put an end to this process, which is called “sue and settle.”

On the surface, sue and settle doesn’t sound bad. An organization sues a federal agency to compel it to issue regulations, which the agency was already required to do under the law. Instead of litigating, the agency just settles the dispute.

Even when the agency is merely agreeing to meet a deadline as required by law, the agency and the environmental group will enter into agreements that create unrealistic timelines that can lead to bad policy. They can set deadlines to avoid many of the regulatory safeguards that exist, such as proper cost-benefit analysis.

In many of these cases, there is often a question of whether a federal agency is even required to issue regulations—yet the agency simply caves to the environmental group and does as the group desires.

Even worse, agencies have worked with these environmental groups to develop the substance of regulations before they are even proposed to the public.

And very often, the public is not even aware that the agency is being sued, and will find it very difficult to intervene or have any real voice in providing a different perspective on the lawsuit.

This closed process stands in stark contrast to how the federal regulatory system is supposed to work.

The Administrative Procedure Act, which governs the federal rule-making process, was designed to provide notice to the public, allow for public participation, and give the public a meaningful voice in the regulatory process. Sue and settle circumvents this entire process.

The EPA, though, is taking action. Here’s what the EPA directive says:

The U.S. Environmental Protection Agency, in partnership with the states, serves a vital role in protecting human health and the environment. When conducting agency action to achieve these objectives, the EPA must strive to promote transparency and public participation to provide the American public with due process, accountability, and a sense of fair dealing.

To stop sue and settle, the EPA explains it will do the following, among other things:

The EPA should be commended for taking this much-needed action against sue and settle. Other agencies, such as the Department of Interior, need to follow the EPA’s lead.

Congress also needs to pass legislation to do away with this sue and settle abuse so that it can’t happen in the future.