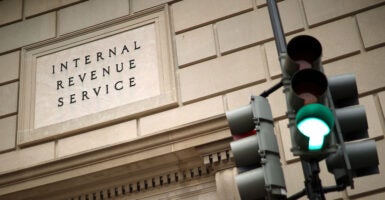 The $1.2 trillion bipartisan infrastructure deal—with as many as 11 Republican senators on board—isn’t limited to building roads, bridges, and broadband. It also includes building up the Internal Revenue Service by $40 billion over 10 years.

If passed, it would get President Joe Biden halfway to his goal of $80 billion over a decade in additional funding for the IRS to hire more agents and collect more money. In theory at least, more IRS agents for enforcement would mean more revenue to help pay for the deal without raising tax rates.

Though less than what Biden wanted, the bipartisan deal for $40 billion over 10 years would expand the IRS budget by more than one-third annually from its current fiscal year 2021 level of $11.9 billion.

Still, the $1.2 trillion compromise is more focused on actual infrastructure than the $2.25 trillion plan by Biden that proposed spending only about 5% of the total on what’s traditionally recognized as infrastructure; specifically, public construction projects, such as roads and bridges.

“It is a mistake for any Republican to believe the idea that hiring more IRS agents will raise more money to be used for ‘pay-fors,’” Norquist told The Daily Signal.

The reality is that wealthy taxpayers might be using legal tax loopholes, and increasing the IRS workforce isn’t going to change that, he said.

“Who are they going to go after? Fortune 500 companies have the best lawyers and accountants,” the tax critic explained.

This leaves cash businesses like nail salons and food trucks. These are small businesses, often run by immigrants. If Biden wants to declare war on small business and immigrants, that’s not going to produce a lot of revenue.

Bloomberg News reported last week that the IRS small-business and criminal investigation divisions are already hiring thousands of new auditors in anticipation of the infrastructure cash infusion to its budget. The agency lost about 17,000 auditors over the past decade, according to Bloomberg.

Perhaps more problematic, Norquist noted, is the prospect of a politicized IRS. He referred to the IRS targeting of tea party groups and other conservative organizations during the Obama administration, the politicized union that IRS agents belong to, and the recent leak of confidential tax data to the investigative website ProPublica.

“The idea that any lawmaker, Republican or Democrat, votes to expand the IRS and would reward this lawlessness and corruption without cleaning it up is not being serious stewards of tax dollars,” Norquist said.

The Biden administration cites a study from the Wharton School of Business at the University of Pennsylvania that said the White House plan to boost IRS funding would bring in $480 billion over a decade. However, Republican senators who are working with the White House on the plan are skeptical it would produce that much additional revenue, pointing to Congressional Budget Office estimates that are significantly lower.

“There’s a Wharton study that suggests you can get like $400 billion, and then there’s the CBO that says it’s $63 billion net over 10 [years], so how do you square that?” said Sen. Bill Cassidy, R-La., according to The Wall Street Journal.

Senate Republicans backing a bipartisan infrastructure bill say revenue can be increased by greater IRS enforcement. However, they project increased enforcement would net about $100 billion more over a decade, only about a quarter of the Biden White House estimate.

Meanwhile, much of the compromise is undefined. While Biden’s previous $80 billion proposal for the IRS would have meant 87,000 new IRS agents, the compromise doesn’t specify the number of new hires. Logically, the $40 billion would mean about half that many.

Past infrastructure spending, however, failed to produce an economic boom.

Five Republican senators went to the White House to help negotiate the plan last week. Biden initially said he would insist on approval of a strictly partisan, more costly plan from Democrats as a precondition for signing the bipartisan bill. But he subsequently backtracked.

To date, 11 Republican senators have offered at least conditional support for the plan. They are, in addition to Cassidy, Sens. Lisa Murkowski of Alaska, Todd Young of Indiana, Jerry Moran of Kansas, Susan Collins of Maine, Richard Burr and Thom Tillis of North Carolina, Rob Portman of Ohio, Lindsey Graham of South Carolina, Mike Rounds of South Dakota, and Mitt Romney of Utah.