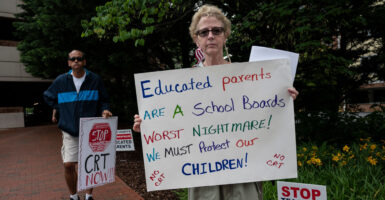 Americans are waking up to the threat posed by critical race theory, which is often presented behind a cloak of secrecy and the banner of social justice, and across the country, they are now fighting back.

The Biden administration may have reversed former President Donald Trump’s ban on critical race theory and so-called anti-racist training in government agencies, but Americans from a diverse set of backgrounds are now making this a national fight, which is dramatically playing out on the local and state level.

What has been the response from the left to this popular rebellion against critical race theory?

When asked about debates over critical race theory taking place at school board meetings in Northern Virginia, former Virginia Gov. Terry McAuliffe, a Democrat, earlier this month called it a “right-wing conspiracy” made up by Republicans.

On Sunday, NBC’s “Meet the Press” host Chuck Todd said that resistance to critical race theory was “manufactured,” and one of his guests, Cornell Belcher, a Democratic Party strategist, said it was nothing more than a “tool … in the racial tribal bogeyman’s toolbox,” concocted for electoral purposes.

Others on the left have said that critical race theory has been too broadly defined by opponents and legislatures that want to remove it from public institutions. It’s just an insignificant school issue, they insist: Pay no attention to the man behind the curtain.

Critical race theory is bad, you say? We’ve never heard of it, but stop trying to stop it, fascist!

These dismissive rebukes miss the point that many Americans reject the broad range of woke racial ideology that is broadly being promoted by activists, media, corporations, bureaucrats, and even the military to destructive effect.

Has the left bothered to narrowly define “white supremacy”—or for that matter, racism, which has been attributed to apple pie, bird names, and the air, among other things?

The fact is, critical race theory has given rise to a host of terrible ideas and policies that have gone by many names.

Information about what critical race theory and various other “anti-racism” programs are really about has been exposed by Christopher Rufo, a senior fellow at the Manhattan Institute, and many others. Its influence in schools has also been revealed by the fact that many parents have directly witnessed it as a result of the COVID-19 lockdowns and the resulting move to virtual education at home.

It’s clear that critical race theory is not just diversity or sensitivity training, but an attempt to remake American society entirely defined by race, with its end result being a kind of neo-segregation, where opaquely defined “systemic” racism, “white supremacy,”  and inequity are “combated” with more racism.

It turns out that Americans, in large numbers, oppose those ideas, and a growing number are organizing to stop it.

A lot has happened in just the past few months.

Voters in Southlake, Texas, rejected—by a wide margin—a slate of school board and City Council candidates, and a mayor who had embraced critical race theory.

That became possible, according to Hannah Smith, one of the now newly elected school board members opposed to critical race theory, after she and other members of the community filed public records requests.

They uncovered the local school district’s unironically named, but Soviet-style “Five-Year Plan,” which injected critical race theory into its curriculums and teaching. They then organized in opposition, making their voices heard at school board meetings and ultimately at the ballot box.

That became a blueprint for other similar local rebellions, now playing out around the country in dramatic fashion as concerned parents and teachers have made passionate denunciations of the radical agenda being foisted upon their communities.

In Loudoun County, Virginia, an exurb of Washington, D.C., there has been a massive pushback against critical race theory after the school board—in league with a highly paid team of “diversity consultants”—not only tried to inject the ideas into classrooms, but attempted to make it mandatory for teachers and faculty to support it in their official capacity and private lives.

One school board member even tried to create a sort of “enemies list” of parents opposed to critical race theory to “silence the opposition.”

These Soviet-style tactics sent a clear message: Embrace the school district’s plan for “Diversity, Equity, and Inclusion”—or else.

Parents took notice, and did what citizens in a self-governing society do when authorities threaten to silence them.

A Loudoun County mother, Xi Van Fleet, an immigrant from China who escaped the country’s Maoist Cultural Revolution, lambasted the direction of the school district at a school board meeting.

“I’ve been very alarmed by what’s going on in our schools,” she said to Loudoun County School Board members in a passionate speech. “You are now teaching, training our children to be social justice warriors and to loathe our country and our history.”

A Fairfax County teacher, Lilit Vanetsyan, also spoke at a Loudoun County School Board meeting, and torched what she called the “indoctrination” taking place in that school district and others.

“Students, you are on the front lines of these indoctrination camps,” Vanetsyan said. “Challenge the staff when you are presented with a ludicrous statement and do not allow anybody to tell you that you cannot accomplish anything because of your skin color or to hate yourself because of your skin color. Students, it is up to you to be the next generation of victims or victors.”

Battles over critical race theory are playing out at the state level, too.

The California State Board of Education may have made ethnic studies within a framework of critical race theory mandatory for public school students, but it seems much of the country is not going the way of California.

Other states have banned or are in the process of banning critical race theory from being used in K-12 curriculum. Some have gone on offense, passing laws to implement instead what has been called “informed patriotism” in their schools.

Texas recently passed the 1836 Project into law, creating a committee that would work to promote a “presentation of the history of this state’s founding and foundational principles; examination of how this state has grown closer to those principles throughout its history; and explanation of why commitment to those principles is beneficial and justified.”

Nikole Hannah-Jones, creator of The New York Times’ 1619 Project, said the Texas bill was “part of a legacy of the government banning the discussion of slavery.”

But the bill doesn’t ban the teaching of slavery or racism at all.

An NBC News story, which came off as activism under the guise of “news,” promoted the claim that the sudden explosion of resistance to critical race theory is just an “astroturf” campaign by conservatives against well-meaning people who just want to end racism.

Noah Pollak, a contributor to The Washington Free Beacon, tore apart the piece in a Twitter thread well worth reading.

Pollak noted that the spin from the left and the media is a good sign for those who oppose critical race theory.

After years of promoting radical wokeness and an entirely racialized view of America, it seems the mostly left-wing establishment media is now spinning to deny that these ideas now pervade private and public institutions.

Perhaps the revolt against critical race theory isn’t just a “conspiracy theory” after all, but an impassioned opposition to ideas that Americans see as malignant when put into practice.

And perhaps it isn’t just a way to dodge talking about race and slavery, as its proponents claim, but a rejection of teaching and talking about these subjects through a warped and wrongheaded ideological lens that will make Americans more racist, not less.

The rebellion against critical race theory is real, and the movement is growing. It has become a serious threat to the agenda of woke social justice crusaders, who apparently thought the revolution was complete.

But Americans—and citizens throughout the Western world—are becoming aware of the danger and of the dire implications of what it means when these ideas migrate from the ivory tower and the pages of The New York Times into our everyday lives.

Opponents are now beginning to win this fight. It turns out that when people actually learn what critical race theory is—and more importantly, how its proponents want to put it into practice—a majority stands in opposition.