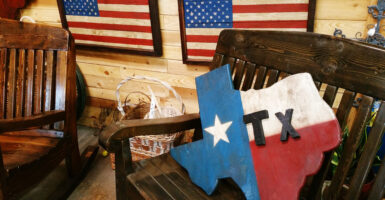 Texas Gov. Greg Abbott signed into law the 1836 Project, promoting patriotic education in Texas' public k-12 schools that will include teaching about Texas' revolution in 1836 and other aspects of Texas history. (Photo: Getty Images)

Informed patriotism, as Ronald Reagan once suggested, is what America needs.

And that’s what some Texas lawmakers aim to bring to their state after Gov. Greg Abbott signed the 1836 Project into law Monday. Texas’ revolution for independence from Mexico, which put it on the path to joining the United States, concluded in 1836.

Texas’ new law will create a nine-person advisory committee to serve two-year terms and create a “presentation of the history of this state’s founding and foundational principles; examination of how this state has grown closer to those principles throughout its history; and explanation of why commitment to those principles is beneficial and justified.”

Abbott, a Republican, celebrated the new law on Twitter:

It’s a clear counter to The New York Times’ 1619 Project, which is focused on reframing American history around the idea that slavery was the cornerstone of the country’s founding. It has been challenged by numerous historians for having serious factual errors.

Some critics of the new Texas law say that it’s a way for the state to avoid the teaching of racism and slavery in the state, but from the language of the legislation itself, it appears to do no such thing.

It’s likely that critics are more concerned with the law preventing a teaching of slavery through the lens of critical race theory.

As historian Mary Grabar wrote for The Federalist, one can get a more “multifaceted, honest, and truthful history” of slavery and racism without the dogmas of critical race theory placed over it.

Critical race theory, as it is promoted and practiced, will make America a more racialized society. It returns America to the real mistakes of our past, where people were treated differently under the law because of their ethnicity or national origin.

Promoting critical race theory in the teaching of history or any other subject in K-12 schools may create more left-wing activists, but it won’t give students a better understanding of the past. And it will certainly give them a worse future.

Teaching about racism and slavery in our history should be placed within a context of the larger story of America and the world.

Students should learn that George Washington is not a white hero, and Frederick Douglass is not a black hero. They are American heroes, flawed as all men are, but great in thought and deed, and in what they gave to our country and to our world.

That America’s past is full of flaws and injustices is what makes us unremarkable—like all other people. Young Americans must know that the world we live in is a fallen one. There is no special race of people who are blameless oppressed on one hand and unredeemable transgressors on the other.

We are all the children of slaves and slaveholders.

There is no year zero. We must live with the past as it is.

What a “patriotic” education should do is simply emphasize the best elements of our character, while providing a broad overview of our history, warts and all.

Despite the fallen world we live in, the United States has carved out a special place as a bastion of liberty. And its net of liberty has been cast to a wider catch of people since it was founded, thanks to the core beliefs baked into its creation in 1776.

America is not an idea; it’s a country forged by men and women with many great ideas, and some bad ones, too.

Young Americans should be taught to appreciate the real triumphs of our past—and to avoid the tragic mistakes.

It seems that many have lost touch with that idea. Certainly, America’s most elite institutions have, with overzealous woke inquisitors now apparently holding court and threatening heretics with cancellation.

The Soviet Union had an entire society that looked like that. It ended up on the ash heap of history, in death by suicide.

In Reagan’s presidential farewell address in 1989, he famously called for an “informed patriotism.” He said that while the American spirit had been revived, we were entering an era in which parents aren’t sure whether an “unambivalent appreciation of America is the right thing to teach modern children.”

He added that, for those who were shaping modern culture, “well-grounded patriotism is no longer the style.”

So, while Reagan celebrated the renewed patriotic spirit, he also challenged us to reinstitutionalize it—or else that spirit would fade.

Unfortunately, a dwindling number have kept the spirit of Reagan as our schools taught left-wing historical revisionist Howard Zinn, our universities became hotbeds of leftist dogma that discourages independent thought, and governments and corporations embraced a shallow, hypocritical, and destructive woke agenda that ends with neo-segregation.

The challenges we now face with critical race theory and mobs destroying history and statues did not begin overnight.

The institutions now act as though the revolution is a foregone conclusion. But perhaps, even at this late hour, Americans—the real democracy of this country—are waking up to the crisis.

The frog may have been boiling unaware, but the cooks might have turned up the heat just a little too much.

That new law in Texas to reinvigorate a patriotic education is just a small part of that large effort to reinstitutionalize something that has been in long, slow decline, but not yet wholly lost.