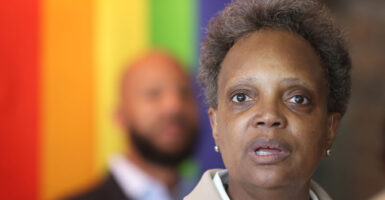 The Daily Caller News Foundation and Judicial Watch sued Chicago Mayor Lori Lightfoot when she announced her policy that barred white reporters from interviewing her May 19. Pictured: Lightfoot speaks to guests at an event held to celebrate Pride Month June 7, 2021, in Chicago. (Photo: Scott Olson/Getty Images)

Peter Kirsanow, a member of the United States Commission on Civil Rights, blasted Chicago Mayor Lori Lightfoot’s policy that barred white reporters from interviewing her in a letter Monday.

The Daily Caller News Foundation and Judicial Watch sued Lightfoot after she announced her policy on Twitter May 19. Thomas Catenacci, a foundation reporter, was denied an interview after repeated attempts to secure one.

“A government official, such as yourself, depriving individuals of opportunities on the basis of their race is explicitly discriminatory,” Kirsanow wrote in the letter. “Government-sanctioned bigotry is the same sort of horrid behavior that Americans of all stripes rejected, fought against, and ultimately conquered decades ago.”

“An objective observer cannot help but wonder why such immoral and un-American attitudes are coming from the Office of the Mayor of Chicago,” he added.

During a court hearing last Monday, U.S. District Judge John Z. Lee ordered Lightfoot’s office to clarify its policy, and it subsequently said that the policy was only in effect for two days.

“What we saw [during the hearing] … was a really encouraging sign,” Catenacci said last Friday. “Essentially, the judge ordered the mayor and the city to state on the record and present to the court its [clarified] policy.”

“What that means is that the city will have to say, ‘Yes, for one day we did discriminate based on race.’ And then from that point forward we’ll see what they give the court,” Catenacci said.

Lightfoot described the suit against her as “frivolous” ahead of her office’s clarification, saying that she would have used a “more colorful term” had she not been on live television.

“Attorney General Garland should follow Commissioner Kirsanow’s lead and initiate a federal civil rights investigation into the mayor’s office,” Fitton said. “Mayor Lightfoot has already confessed to discriminating against journalists based on their race.”

Lightfoot’s policy has been widely condemned, including by journalists of color.

One Latino reporter at the Chicago Tribune who was set to interview Lightfoot backed out of the interview after the mayor refused to rescind her policy.

“I asked the mayor’s office to lift its condition on others and when they said no, we respectfully canceled,” Tribune reporter Gregory Pratt wrote on Twitter. “Politicians don’t get to choose who covers them.”