What Will Drive Illinois to Ask Washington for a Bailout 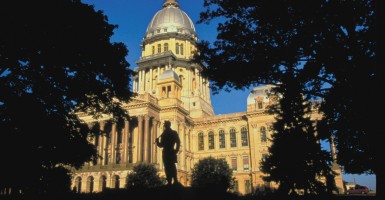 Earlier this month the Illinois Supreme Court overturned a state law that would help fix the state’s notorious pension crisis. What a tragedy for the state’s taxpayers. The justices basically ruled that the pension arrangements are iron-clad, although these pensions are on a course to bankrupt the state and imperil public services that Illinois families depend on. The unions come first. This could have negative consequences for more than half the states that are trying to defuse government employee pension time bombs.

By way of background: Illinois has one of the deepest public employee pension holes in the nation. The long-term deficit is estimated at above $110 billion and the red ink rises every year. Even in California—where several cities have declared bankruptcy—the pension sink hole isn’t as deep on a per capita basis.

The watchdog group Open the Books reports that there are more than 5,000 teacher and other education officials who receive an annual pension of more than $100,000 a year. Worse yet, half of all government employees retire with benefits before age 60. That’s more than twice what a typical private worker gets for having worked 12 months, not nine months, a year.

The Illinois court invalidated a 2013 pension fix that was enacted by a Democratic legislature and a Democratic governor, Pat Quinn. That law cut off the front door to the pension swindle—switching new workers into defined contribution programs like 401k plans. The law also adjusted the automatic cost of living adjustments (now at 3 percent annually regardless of inflation). The reform also adjusted the retirement age for new employees after January 2011, highly important because at least half of the employees covered are retiring before age 60—including 70 percent of teachers. Even the features of the law dealing with new employees entering the bankrupt system were unbelievably tossed out by the court meaning that the costs must keep rising inexorably into virtual perpetuity.

The victims of these daunting pension costs are citizens who rely on state services. Pension checks are crowding out funding for everything else and last year rose 12 percent as most state spending is being cut or frozen.

More than 5,000 teacher and other education officials receive an annual pension of more than $100,000 a year. Worse yet, half of all government employees retire with benefits before age 60.

The state can’t borrow—it already has the worst credit rating in the nation. It has to borrow less—not more. Last week’s court decision sent interest rates on Land of Lincoln debt to even higher levels—near junk bond status. Days later, Chicago bonds were marked down to junk status.

The state is already making deep cuts in other spending programs. To accommodate lavish government retiree pensions, the court has rules that everything else—from funding for schools, roads, bridges, prisons, and police services—gets whacked. Current Governor Bruce Rauner is taking on the unenviable job of cutting at least $6 billion from state spending in order to balance the budget. The Court just made his job doubly excruciating.

The liberal justices made no secret of their preferred fix: raise taxes. They wrote: “the General Assembly could have also sought additional tax revenue,” and they chastised lawmakers for allowing a highly unpopular temporary tax increase to expire “even as pension funding was being debated and litigated.” But that tax hike was never meant to pay for pensioners even though most of the money was used to plug the massive growth in annual retirement payments.

Raising taxes is an economic suicide pact for Illinois citizens. Illinois is already losing businesses and jobs due to some of the highest tax burdens in America. Raising taxes, as the pols in Springfield found out in recent years, raises almost no money because it accelerates the exodus to Texas, Florida, and Arizona.

The Court rejected the plea by lawmakers and others that the pension crisis qualifies as an emergency that grants the legislature the option of disregarding the pension protection clause. But this problem is a financial ticking time bomb that imperils funding for basic services that taxpayers and businesses depend on. Is it not an emergency if the municipalities can’t get ambulances or fire trucks to their residents for lack of funds?

As in so many states today, pension costs in Springfield are crowding out funding for basic municipal services taxpayers depend on. The cost of borrowing keeps rising because of investor fear that these states will soon look like Greece. Balancing the budget now seems impossible. And the only people feeling financially secure are the state’s retired government employees—many of whom have moved to Palm Beach and Phoenix.

If courts won’t allow states to trim pension costs, eventually states like Illinois will rush to Washington for federal bailout money. With more than $1 trillion in unfunded public pensions nationwide, Illinois is looking like the canary in the coal mine. What a tragedy if courts in other states prevent legislatures from defusing these fiscal time bombs.