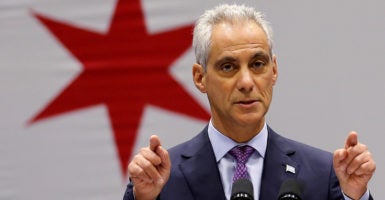 Chicago Democrats ought to put aside their partisan agenda and seek President Donald Trump’s help to decrease shootings, urges a state lawmaker who represents the city’s West Side.

Chicago Mayor Rahm Emanuel is showing the wrong kind of leadership by continuing to declare the city a “Trump-Free Zone,” state Rep. La Shawn Ford said in media interviews over the past few days.

“The mayor, he must take away the thought that Chicago is a Trump-Free Zone, because taxpayers deserve to have the president come in and bring resources to the community,” Ford said Monday morning on “Fox & Friends.”

The city is now “worse than the days of Al Capone” and “the bloodiest city in America,” he told Laura Ingraham on the Monday night edition of her Fox News show, “The Ingraham Angle.”

Ford’s call to action came after 66 people were shot in Chicago over the weekend, including 30 over three hours early Sunday, leaving 12 dead. Police reported no arrests.

“If [Trump] is serious about helping the people of Chicago, especially on the West Side of Chicago, then I accept his help,” Ford already had told Fox News Thursday at a protest before the weekend bloodbath.

With the weekend’s carnage, the number of shooting victims this year escalated to 1,783, including 318 deaths, Ingraham’s LifeZette website reported.

Ford’s plea for Trump’s help isn’t the answer to violent crime in Chicago, one veteran community activist in the nation’s capital told The Daily Signal.

“The answer won’t be found in the White House or City Hall,” Robert Woodson, founder and president of the Woodson Center, said in a phone interview. “It can be found where the problem exists, and city leaders don’t know where to look.”

Woodson’s organization, formerly the Center for Neighborhood Enterprise, describes its mission as helping residents of low-income neighborhoods solve problems such as crime, violence, and drugs. For Chicago’s mean streets, he prescribes what he calls the “community antibodies” approach that he has used elsewhere.

“The answer is that there are indigenous leaders in the community who are part of the problem and can play a role in the solution,” Woodson said. “Like [treating] a snake bite, you would take part of the venom and make an antibody.”

Emanuel, a Democrat who previously was President Barack Obama’s chief of staff, is running for election next year to a third four-year term.

The mayor officially designated Chicago as a “Trump-Free Zone” last September, after the president moved to end Obama’s Deferred Action for Childhood Arrivals program, or DACA, which shields certain illegal immigrants from deportation.

Instead, Emanuel welcomed so-called “Dreamers” to the city—those who were brought illegally to America as children—and promised them protection from deportation regardless of legal status.

Since Emanuel assumed office in 2011, the city has seen an increase in homicides and other gun violence. So far, 2016 holds the record in Chicago for the highest number of shooting victims in 19 years, with 4,331 shooting victims, including 771 homicides.

Ford, a real estate broker and member of the Illinois House of Representatives since 2007, has said he believes the rise in gun violence stems in part from the mayor’s inflammatory rhetoric about Trump, as well as some residents’ distrust of Chicago’s police force.

“It is clear that the Chicago Police Department is not trusted with the mass genocide that’s happening on the streets of Chicago,” Ford told Fox News.

“You can’t get the cooperation with the citizens in the community to help solve the crimes,” he said. “Chicago right now has more unsolved crimes than they do solved crimes. And so what we have to do is make sure that there is some trust between the Chicago police and the community, and that’s not happening.”

“Chicago continues to be an example of how strict gun laws fail law-abiding citizens, and do not curtail criminal actions by those who weren’t willing to follow the law in the first place,” Swearer said in an email to The Daily Signal, adding:

These deaths are all tragic, and unfortunately appear to continue the trend of gun violence disparately impacting minority and lower socioeconomic-status communities.

Since Chicago law enforcement cannot adequately protect Chicago residents from violent crime—despite admirable efforts of hard-working officers to do so—the city should ensure that law-abiding citizens are able to protect themselves with the same weapons that are ultimately being used against them on a regular basis by violent criminals: firearms.

What the Federal Government Could Do

Swearer said she agrees with Woodson that the federal government cannot do much on its own—short of the “extreme measure” of declaring martial law—to help mitigate gun violence in Chicago.

Instead, she offered ideas for what the federal officials could do to work with city officials.

“The federal government can and should continue to enforce violations of federal law, including investigating and prosecuting cases of the illegal possession or transfer of firearms,” Swearer said, adding:

It should continue to cut business-killing regulations and promote tax cuts that will leave Chicago residents with more viable options for economic success, which is associated with decreases in violent crime. And it can coordinate with local police to help them investigate cross-jurisdictional crimes in a more effective manner.

But ultimately, the city of Chicago has a problem on its hands that is almost entirely the result of actions taken by the city itself—the federal government cannot restore trust between the people of Chicago and its police force. The federal government cannot remove citywide regulations that increase housing costs, decrease economic opportunities, and ultimately lead to increased violent crime.

The federal government cannot stop Chicago from enacting local gun laws that hamper the ability of law-abiding citizens to feel secure in their persons and their homes. The city of Chicago must do those things, on its own.