Our ICBMs Are Not on ‘Hair Trigger’ Alert 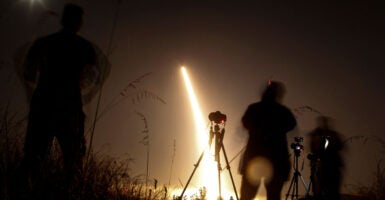 Critics often claim that U.S. ICBMs are maintained on “hair trigger alert.” This is a myth. Pictured: U.S. military personnel test fire an unarmed ICBM at Vandenberg Air Force Base in California on May 3, 2017. (Photo: Ringo Chiu /AFP/Getty Images)

The claim that U.S. intercontinental ballistic missiles, or ICBMs, are maintained on “hair-trigger alert” has persisted despite multiple senior military leaders having discredited that falsehood.

One such accusant is President Joe Biden’s nominee to be the Department of Defense’s assistant secretary for nuclear, chemical, and biological defense programs, Deborah Rosenblum. She has stated that U.S. and Russian ICBMs are “in a hair-trigger mode, leaving no time for either president to make a considered decision, if he or she thought the nation was under attack: No time to gather data, no time to figure out if it’s a spoof, no time to discover mistakes.”

As a result, the argument goes, nuclear war can start with a mistaken launch caused by a false alarm. Yet, as Adm. Charles Richard, commander of U.S. Strategic Command, has made clear, hair-trigger alert is “not a thing.”

Our ICBMs are responsive, yes. They can launch within minutes of a presidential order to do so. But their responsiveness does not equate to being just a breadth away from accidental launch; it means that adversaries know that the United States can respond quickly to an attack.

Contrary to what critics would have you believe, the United States does not rely on a “launch on warning” policy where the president would launch our ICBMs upon first warning of an attack. Rather, the president has a number of response options that do not limit him to either “using or losing” our ICBMs.

When a potential nuclear attack is launched at the U.S. or its allies, a host of sensors and radars based in space, land, and sea apprise decision-makers of adversary activity and help maximize decision time.

Context also plays a clear role. A nuclear attack against the U.S. would likely occur within the backdrop of mounting tensions or conventional conflict, making the scenario of a false alarm improbable. Trained military assessors put all this information together and advise the president.

To boost deterrence, the United States does retain the option to launch its ICBMs before an incoming attack detonates based on this host of information. As one of former President Barack Obama’s assistant secretaries of defense, Robert Scher, explained:

This policy of retaining the option to launch under attack enhances deterrence of large-scale nuclear attack. Potential adversaries with large nuclear arsenals cannot be certain of their ability to destroy U.S. ICBMs because the president has the option of launching those forces before the incoming adversary strike reaches its targets.

In practice, the president can also wait for a nuclear attack to detonate and still retain the ability to retaliate with a nuclear strike. This option could be employed if the president lacks the certainty to determine whether an incoming attack is legitimate or a spoof.

If the data on an incoming attack is unclear, launching U.S. ICBMs only to find out the attack was a false alarm would be much worse than waiting out an attack. That is why the United States maintains an assured second-strike capability—to enable the strategic stability that prevents the nightmare scenarios posed by those who cry “hair trigger.”

Additionally, a multitude of stringent safeguards make an accidental or unauthorized ICBM launch nearly impossible. The process for launching an ICBM is so tedious that it extends beyond the scope of this article. When the airmen working the ICBM silos receive an emergency message for ICBM launch, they must go through complicated procedures to decode the message, authenticate its source, target the ICBM, unlock the missile, and more.

Through these strict safety procedures, the ICBM force maintains nuclear surety, meaning preventing launches from occurring without the president’s orders, and positive control, meaning ensuring a presidential order to launch is successful.

An ICBM is not like a loaded gun lying on the table with the safety off and a finger on the trigger. Nor is there a “big red button” waiting to be pressed.

To use an analogy coined by Richard, by the logic of “hair trigger,” our cars are on hair-trigger alert, too, waiting in the driveway ready to go. But you don’t see cars driving around accidentally. And cars only require three steps to go—turning on the engine, putting it into drive, and hitting to gas.

Compare that to the complicated process for launching ICBMs, which would be more aptly likened to the process of getting something approved within a big government bureaucracy.

Given the procedures and safeguards required to launch ICBMs and their critical role in deterring large-scale attacks against the United States, it’s past time to retire the claim of “hair-trigger alert.”