Bill Would Give Congress Tighter Rein on National Emergencies 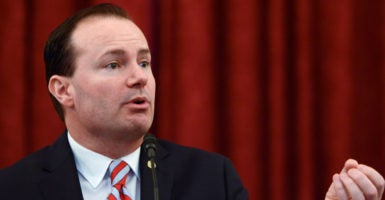 Sen. Mike Lee’s bill would revise the law to say that a president's declaration of a national emergency automatically expires after 30 days unless the House and Senate vote to keep it. (Photo: Leigh Vogel/ Stringer/Getty Images)

Congress would reclaim powers it conceded to the executive branch more than 40 years ago in the declaration of national emergencies, if a bill introduced by Sen. Mike Lee, R-Utah, becomes law.

“If Congress is troubled by recent emergency declarations made pursuant to the National Emergencies Act, they only have themselves to blame,” Lee said in a statement Tuesday marking introduction of his bill.

“Congress gave these legislative powers away in 1976 and it is far past time that we as an institution took them back,” Lee said of his bill, called the Article One Act in a reference to the section of the Constitution establishing the legislative branch and its powers.

President Donald Trump provoked some Republicans as well as Democrats by declaring a national emergency Feb. 15 in order to unlock funding for his promised barrier along the U.S.-Mexico border.

The National Emergencies Act, passed in 1976, put a statutory framework in place allowing a president to declare a national emergency, with some limitations. It also allows Congress to end any emergency declaration if it has the votes to do so, and stipulates that a president must renew the declaration after 180 days.

Lee’s bill would revise the law to say that an emergency declaration automatically expires after 30 days unless the House and Senate vote to keep it.

Lee says it’s time for Congress to reclaim the powers it gave to the executive branch in the National Emergencies Act.

Although Trump acted within the scope of the law as written, Lee’s proposal makes sense, John Malcolm, who directs the Meese Center for Legal and Judicial Studies at The Heritage Foundation, said in an email to The Daily Signal.

“I am very sympathetic to Senator Lee’s position that Congress has delegated an excessive amount of its lawmaking authority to the executive branch—mostly to executive branch agencies, but occasionally to the president himself,” Malcolm said.

“As a general matter,” he said, “Congress should stop passing the buck and should reclaim its legislative power, which will strengthen the separation of powers that the Founders considered, and correctly so, essential to preserving our liberties.”

“If we don’t want our president acting like a king, we need to start taking back the legislative powers that allow him to do so,” Lee said. “The Article One Act will go a long way to restoring the balance of powers in our republic.”

The Senate is scheduled to vote Thursday to reverse Trump’s emergency declaration, and Senate Majority Leader Mitch McConnell, R-Ky., has hinted that the Senate may reform the 1976 law.

“There’s a lot of discomfort with the law—not that the president doesn’t have the authority to do what he is doing,” McConnell said Tuesday.

“I think most of my members believe this is not a constitutional issue in that sense, but rather: Is this grant of authority to any president—not just this one, any president—was it too broad back in the ’70s when it was passed?”