How the Washington Establishment Actually Operates 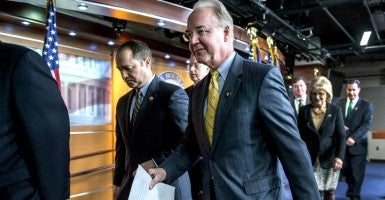 With $19 trillion in debt crippling our economy this 'vote yes before you vote no' strategy is no longer an option. (Photo: Kevin Dietsch/UPI/Newscom

Last week, as the national media obsessed over President Barack Obama’s Supreme Court nomination, two conservative lawmakers did exactly what they were supposed to do: Listen to their constituents.

The House’s budget should be an opportunity for House conservatives to lay out their spending agenda for the year. Instead, this budget concedes on the FY17 spending levels laid out in last year’s Bipartisan Budget Act (BBA). Conservatives should reject this budget and insist that the House revert back to the previous discretionary spending caps of $1.040 trillion.

Despite valid policy concerns and public opposition from the Republican Study Committee and the House Freedom Caucus, House leadership and Budget Chairman Rep. Tom Price, R-Ga., pushed ahead with a budget that would lock in the Boehner-Obama budget levels established last fall over the objection of 167 House Republicans.

Leadership’s insistence on passing a budget that ratified elevated spending levels opposed by conservatives put the seven members from the House Freedom Caucus, as well as other conservatives who serve on the Budget Committee, in a difficult position.

In 2012, when Rep. Tim Huelskamp, R-Kan., and Rep. Justin Amash, R-Mich., voted against the budget resolution of then-Chairman Paul Ryan, R-Wis., they were promptly removed from the committee.

It was a principled position—and their constituents should be proud.

The entire episode also shed light on an uglier problem in Washington that has serious policy implications. On a weekly basis, members of Congress vote for bills they disagree with in principle, practice, and policy—and their constituents would, too—because they are being “team players” and making the legislative process “work.”

Here’s how it works at the committee level.

At the start of each Congress, many committee chairmen essentially force members to pledge their support for the big-ticket items the chairmen want to report out of their committee. For the Budget Committee, that is the annual budget resolution. The chairmen tell the members they can vote against the proposals on the House floor, but they demand their unflinching loyalty in committee.

And it goes even farther than voting. Transportation and Infrastructure Committee Chairman Bill Shuster, R-Pa., for example, required his new committee members to agree that they would not cosponsor the Transportation Empowerment Act (TEA). The Transportation Empowerment Act is a bold conservative reform plan offered by Rep. Ron DeSantis, R-Fla., and Sen. Mike Lee, R-Utah, that would give states and localities far more control over their infrastructure spending by phasing out the federal gas tax.

Put another way, Shuster forced his committee members—many of whom believe that their position on that committee is integral to their influence and re-election prospects—to promise they wouldn’t cosponsor a bill that removed power from Washington. This is how the establishment operates: by using political power and prestige to tell lawmakers how they can and can’t vote, or what they can and can’t cosponsor.

If more constituents like those in Virginia’s 7th and Indiana’s 3rd were aware of committee votes, fewer representatives would be able to vote yes in committee and no on the floor. But it would be unfair to place the blame on constituents, because if there is a committee member who truly opposes the bill under consideration, this sequence of voting yes and then voting no is not only lacking in principle, but devoid of strategy as well.

Lawmakers say they want to keep their seats on various committees so they can play an outsized role in shaping various pieces of legislation. So the question is, which vote carries more weight: being 1 out of 22 Republicans on a committee, or 1 out of 246 Republicans on the floor?

The answer is obvious, and it was encouraging to see Brat and Stutzman understand this dynamic and choose to use their no votes when it mattered most. Now other conservatives must follow their example and stop wasting their leverage. With $19 trillion in debt crippling our economy and putting the very future of our country in the balance, this go-along-to-get-along “vote yes before you vote no” strategy is no longer an option.