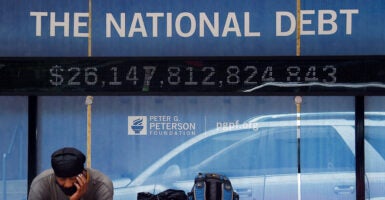 A man waits at a bus stop in Washington, D.C., that displays the national debt of the United States as of June 19. It has only increased since then and is hazardous to our children's and grandchildren's financial futures. (Photo: Olivier Douliery/Agence France-Presse/Getty Images)

Gary Shapiro is president and CEO of the Consumer Technology Association.

This past year has tested us as Americans: We lost loved ones, jobs, and the ability to connect with one another in person. But, as Americans, we will get through the pandemic.

My existential fear for our nation does not involve the pandemic, but rather, the decisions we are letting our leaders make, which are imperiling our children’s future.

In 2022, the federal government will owe close to $30 trillion. Each Congress and president since Bill Clinton—the last president to balance a budget—has added trillions to our debt.

Republicans have expanded the debt by cutting taxes, reducing revenue while barely cutting government. Democrats have grown the debt by well-meaning entitlement and spending programs.

In 2000, the debt was just a few trillion dollars, but it has gone up more than fivefold since then, and we must also pay interest on that debt.

Rising interest rates could soon mean less federal money for anything other than interest payments and spending on entitlements.

Say goodbye to all domestic spending and most defense spending. Or we’ll borrow even more until the nation has an economic collapse, as investors refuse to buy our debt unless we further raise the interest rate we pay.

We could shift from the land of opportunity to the land of indebtedness in just a few years.

We have shifted from a national spirit and culture of self-reliance, with religious institutions and neighbors helping neighbors and backstopping communities, to federal policies that reward and encourage some of the very actions that break down the firmest foundations of America; namely, hard work and strong families.

Why should student loans be forgiven wholesale when other students scraped by and saved for college? Why should we subsidize students with degrees in programs where there are no available jobs?

Why should we give cash payments to most Americans, including the employed, because of the pandemic? Furthermore, benefits are causing many workers to make more from unemployment than employment, making it hard for many employers to find the workers they need. Indeed, Montana announced it will no longer accept the federal supplemental insurance benefits.

The biggest complaint of American employers, large and small alike, is not the pandemic, but the inability to hire anyone to work.

Americans faced shortages of goods, couldn’t get their homes repaired in a timely manner, and waited weeks and even months for deliveries that usually took days because government-imposed restrictions limited physical supply chains. While those problems have abated, government unemployment benefits are still limiting the supply of willing workers and making it harder for businesses to recover.

Yet, in the March $1.9 trillion stimulus package, increased unemployment benefits could encourage some Americans to remain out of the workforce.

That makes sense for many hospitality workers and others sidelined by the pandemic who can’t relocate or lack skills employers want. But we have millions of unfilled job openings for truck drivers, health care aides, and factory workers.

Why would we want to encourage Americans to not work and have future generations pay for this absurdity?

3. Loss of Civility, Push Toward Extremes

Some political leaders are poor role models for our children. They talk about bipartisanship and reducing spending, but care only about complete party domination. They ignore the other side.

Some of our national political leaders view their jobs as being to breed hatred of the other party. We effectively enable them as we choose our team or tribe, and many of us have become haters of the other side.

The top leaders have even abandoned the congressional committee process, putting out only their own legislation, controlling their compliant party members by funding much of their political campaigns, and isolating any party member who dares to disagree.

Frustrated legislators from both parties think they have no choice but to go along with their leaders or be certain to lose the next election for a lack of funding.

4. Decline of Trust and Common Beliefs

Americans increasingly distrust each other and/or the government. Many Americans simply don’t believe the 2020 national election was conducted fairly.

Some believe the pandemic is a hoax, and many refuse to get the vaccine because they think it’s unnecessary or dangerous.

Social isolation has enhanced distrust as it reduced friendly interactions with colleagues and neighbors to discuss and listen to different views. And social media—despite connecting us with friends and family amid the pandemic—at times replaces more friendly and polite physical interactions and actual conversation with an unconstructive and often toxic ethos.

Instead, we increasingly assume bad intentions, rather than give the benefit of the doubt we would give to someone we know well.

We see violence in our cities and at the Capitol. We witness hatred by Americans against Americans, and we wonder what it is besides geography and language that binds Americans.

I’m sad because I believe in the “shining city on the hill” that President Ronald Reagan described.

Our nation, formed by immigrants and built on fundamental human rights, is deteriorating. It’s being destroyed by leaders in both parties, sometimes with good intentions, but sometimes not.

The parties don’t matter. Our children do, and I’m concerned that we’re leaving them a nation of debt, of distrust, and of indolence, looking to government in lieu of the self-reliance we once had.

I yearn for a party focused on national greatness, not fueled by hatred of the other party; for a return to  decency, trust, and respect for other opinions; and for a party welcoming to those who can debate and respectfully disagree and seek common ground.

As Americans, we share this incredible gift of a nation blessed by wealth and natural resources, and based on a belief in the inherent goodness of humans.

It’s a nation whose government’s role was to protect human rights. And those same rights—of freedom of religion, expression, association, accessing information, and owning property—are critical to the continuous flow of ideas and innovation in which we excel and lead the world.

While we are dividing and fighting among ourselves, China—whose government believes in none of those rights—is expanding its influence and seeking to remake the world in its own totalitarian image.

If we care about the nation we leave our children and their rights and character, we must demand that our leaders be accountable.

We must embrace new leaders who will commit to finding common ground based on an honest acknowledgement of agreed-on facts and steeped in shared principles, such as preserving the value of work, human rights, and the principles that bind us and drive our economy and greatness.