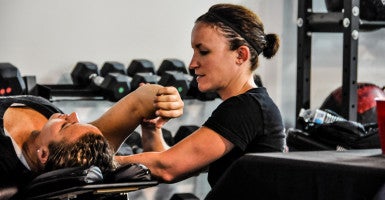 When Andrew Killion opened District Crossfit in 2010, he was training a few handfuls of people in a converted auto garage.

Today, Killion oversees one of the largest Crossfit gyms in Washington, D.C., with six full-time employees—called “coaches” in the Crossfit lingo—who help more than 400 members sweat their way through daily workouts in a 10,000-square-foot warehouse near the booming Navy Yard waterfront.

Now he worries that city officials will take it all away.

Killion and other gym owners in the nation’s capital could soon be subject to the first set of occupational licensing laws targeting personal trainers. The Council of the District of Columbia empowered an obscure regulatory panel, the Board of Physical Therapy, to create the new rules, which are scheduled for a Sept. 22 vote.

“My fear is that because I don’t didn’t study kinesiology, or exercise science, or whatever, they’ll decide that I’m not capable of running this place, just because I don’t have a degree,” Killion said. “The whole thing is a solution in search of a problem.”

One in four jobs in the United States is subject to occupational licensing, which means businesses must get permission from the local or state government before setting up shop. Critics of licensing schemes say they help protect incumbent businesses by limiting competition, driving up prices, and generally disrupting free markets. Those in favor say regulations are essential to make sure personal trainers are properly qualified and safe.

The move seems at odds even with the Obama administration. In a report released in July, the White House warned that excessive occupational licensing rules were limiting the growth of jobs and economic opportunity. It encouraged state and local governments to cut back on the red tape surrounding some professions.

The city government in D.C. apparently didn’t read that report. According to data compiled by The Economist, the city already requires a license for at least 40 percent of all jobs, including interior designers and tour guides. That’s right: you can’t point to the Lincoln Memorial and explain the significance of the larger-than-life marble man seated inside it without first getting permission from bureaucrats.

Lindsey Jenkins didn’t need to get permission from the government before she and her husband opened Humble Beast Crossfit in Dupont Circle a year and a half ago.

Jenkins told Watchdog.org there is plenty of uncertainty about the new rules and how they will affect gyms like hers.

“There’s no answers right now because we don’t know what the new standards are going to be, and whether we’re going to have to pay a fee or get a certification,” she said. “Everyone is feeling a sense of uncertainty.”

That sense of uncertainty spreads beyond the District. Since the city would be the first in the nation to issue regulations for personal trainers, the entire industry is keeping an eye on what precedents will be set.

More than 20 states have made an effort to regulate personal trainers and exercise facilities, but the proposal in Washington, D.C., has advanced farther than any others, said David Herbert, an Ohio-based attorney who edits an industry newsletter called The Exercise, Sports and Sports Medicine Standards & Malpractice Reporter.

“Whatever happens there, may prompt others to get back into the game,” Herbert told Watchdog.

There are more than a dozen private organizations that already offer certification for exercise professionals, Herbert said, and government regulations should have to standardize the process. But regulations also bring higher costs, which will usually be passed along to consumers, he warned.

Others who study the consequences of licensing laws have found they create barriers to entry that could dampen new business formation. The Washington Post has pointed out that the Board of Physical Therapy, which is drafting the new rules, has an inherent conflict of interest since gyms and personal trainers compete with physical therapists for business.

Personal training is a booming business, with more than 241,000 fitness trainers and aerobics instructors in the United States, according to the U.S. Department of Labor. The Washington, D.C., metro area has more than 5,800 people working in the industry, the third highest total for any metropolitan area in the nation.

According to the International Health, Racquet and Sportsclub Association, an industry group, the United States has more than 34,400 health clubs, a 28-percent increase over the past decade.

At the five-year-old District Crossfit, Killion says he would be uncomfortable with rules that made it harder for others to get into the business of personal training—even if he would benefit from slowing the overall growth of his competition.

“In theory, that would be good for my business, in terms of there being less competition,” said Killion. “But when I think about it philosophically, if I were in those people’s shoes, that doesn’t seem right. That could have been me.”