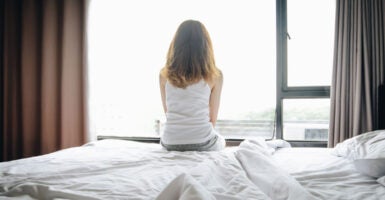 Buried within this bill’s 259 pages are provisions that poison its intent and render it just another political cudgel to advance progressive interests against the very women it claims to protect. (Photo illustration: Boy_Anupong/Getty Images)

“Pass it and save lives,” President Joe Biden said last week in his address to Congress regarding congressional reauthorization of the Violence Against Women Act. The House already did so last month, and given the bill’s title, you’d think it would be an easy lift for the Senate.

After all, doesn’t the Violence Against Women Act have the best interests of American women at heart?

And yet the House vote was split largely along party lines. As one House member noted, a surfeit of add-on provisions had made the bill unnecessarily partisan.

It wasn’t the first time. The law lapsed in late 2018 after provisions about gun control and gender identity inserted in the reauthorization bill stalled congressional action. This year’s version strays even further from the center.

Buried within the bill’s 259 pages are not-so-minor provisions that poison its intent and render it just another political cudgel used to advance progressive interests against the very women it claims to protect.

Take, for example, the not-insignificant inclusions of “transgender” and “gender nonconforming” individuals alongside biological women. Trying to keep pace with Biden’s Jan. 20 executive order on sexual orientation and gender identity, the legislation champions the cause of the few over the protection of the many.

The bill would require vulnerable women in shelters fleeing abuse to be housed alongside biological men in close quarters. The bill makes no concession for opportunistic male predators seeking to target abused women. All that’s required is self-identification as a woman.

Similarly, among its provisions to improve conditions for women in federal custody, the bill further instructs that considerations concerning the location/re-location of transgender prisoners should be done on a case-by-case basis by prioritizing the prisoner’s (not the other inmates’) health and safety, with “serious considerations” given to the prisoner’s own views.

It doesn’t take a crystal ball to predict the outcome of policies like these. We already know.

Washington state allows self-identifying transgender inmates to be housed in the prison of their choosing. A whistleblower at the Washington Corrections Center for Women in Pierce County recently reported that a male inmate who self-identified as a female transferred from a male facility and raped a female inmate on the day of his arrival. The transferred inmate was a convicted multiple sex offender.

Two other trans-identifying biological males have just been transferred to that same women’s facility—both with histories of sexual assault.

With provisions such as these, the legislation makes a mockery of long-standing protections for biological women.

Take also the extensive gun control provisions of the Violence Against Women Act. The bill would expand the list of disqualifying offenses that would prohibit convicted offenders from buying or possessing a firearm. Although all felonies and misdemeanor domestic violence offenses are already included, the legislation would add misdemeanor stalking, even though some stalking offenses can arise without any threatening or personal contact whatsoever.

By broadening the range of both prohibited offenses and prohibited offenders that preclude gun ownership, the House seems problematically eager to divest individuals of a constitutional right without deliberate and careful consideration, and perhaps, introduction of a separate bill.

The version of the Violence Against Women Act currently being debated also fails to rectify several major constitutional issues.

As my Heritage Foundation colleague Paul Larkin has noted, it violates both Articles II and III of the Constitution by permitting the courts of Indian tribal nations (considered sovereign nations, not states) to exercise concurrent jurisdiction over non-Indians charged with certain criminal offenses on tribal lands. This is jurisdiction they do not have, and the provision would likely be struck down as unconstitutional.

So if the government aims to prevent domestic violence on Indian reservations, this legislation certainly will not accomplish it.

Whatever the bill’s laudable aims, they are lost in its pandering to special interests. Americans need a better bill: one all women can support; one that doesn’t use the political camouflage of American consensus on preventing domestic violence and turn it into a stealth vehicle for progressive overreach.

The female victims of abuse deserve better. Those who truly want to address the problem must do better.