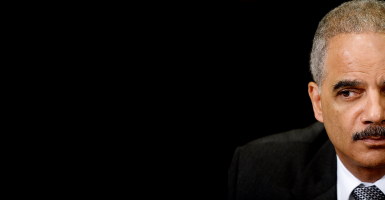 The unexpected resignation of Attorney General Eric Holder follows a series of court rulings against his Department of Justice over its failure to produce documents related to the government’s “Fast and Furious” firearms operation.

Holder also has come under increasing congressional criticism for a tepid investigation of evidence that IRS officials deliberately targeted tea party and other conservative groups for greater scrutiny when they applied for tax-exempt status.

Calling the government’s arguments for “even more time … unconvincing,” a federal judge this week refused to grant Holder’s Justice Department the additional time it requested to turn over a list of Operation Fast and Furious documents withheld under executive privilege exerted by President Obama.

The list is referred to as a “Vaughn index” and requires the Justice Department to justify document-by-document the reasons it hasn’t released the materials. This exercise alone often prompts the release of documents.

The Justice Department sought to delay the Vaughn index until one day before the Nov. 4 midterm elections. But the court ordered the index produced by Oct. 22 instead. The order comes in a Freedom of Information lawsuit filed by Judicial Watch.

“[S]eventy-five days—plus another twenty-one, based in part on Judiciary Watch’s consent—is enough time for the government to prepare the index that this court has ordered, given that this matter has been pending for over two years,” wrote U.S. District Court Judge John Bates. “The court will therefore extend the Department’s Vaughn index submission deadline to Oct. 22, 2014—and no further.”

Holder declined my repeated interview requests over the years. In a recent interview with ABC News, Holder said, “It is the honor of my professional life to serve the American people as attorney general. I hope I’ve done a good job. I’ve certainly tried to do as good a job as I can.”

Holder has served a little more than five years and seven months in office as the nation’s first black attorney general. He is also the first attorney general to be held in criminal contempt of Congress.

As the country’s lead law enforcement official but also a political appointee with great latitude to steer policy, no attorneys general escape controversy. Holder’s activist stance often proved polarizing. From the start, he made clear that he intended for civil rights protection—specifically combating the unequal treatment of black Americans—to be a top priority during his tenure.

The shooting of an unarmed, 18-year-old black suspect by a white policeman in Ferguson, Mo., on Aug. 9 provided Holder a prime opportunity to make his mark. His intervention drew both praise and criticism.

Holder took the unusual step of taking over a police investigation before there was any evidence of that the local police had mishandled, or would mishandle it. It was a step that the Los Angeles Times called “unusually aggressive” writing, on Aug. 20, that “Holder appears locked in an odd and unsteady competition with Missouri officials over which of them, if either, will prosecute Ferguson Police Officer Darren Wilson first.”

Holder also launched a broad civil rights investigation into the Ferguson police department and other police agencies in the area. His officials have already held two meetings in Ferguson to hear the opinions of black community members when it comes to their treatment by police. Holder won both praise and criticism for his aggressive intervention after the shooting of an unarmed black man by a white police officer in Ferguson, Mo. (Photo: Newscom)

Insiders said Holder considered resigning in 2012 amid the Fast and Furious fallout but was convinced to remain in office.

Fast and Furious proved a devastating black mark on Holder and his agency. As I first reported in February 2011, federal Bureau of Alcohol, Tobacco, Firearms and Explosives agents under the Justice Department had allowed thousands of assault rifles and other weapons to fall into the hands of Mexican drug cartels. The controversial, secret strategy was supposedly to see where the guns ended up and take down a drug kingpin. Instead, the weapons were used in violent attacks, including the murder of Border Patrol Agent Brian Terry in December of 2010. In subsequent congressional hearings, Holder testified he hadn’t learned of Fast and Furious until a few weeks before. When documents surfaced showing that he had repeatedly been directly sent briefings on the case, a spokesman said that Holder had misunderstood the question.

Eventually, the Justice Department retracted the denials it had made to Congress. After documents and witnesses indicated that White House officials had discussed Fast and Furious, Congress issued subpoenas. Holder withheld them and, in a bipartisan vote, was held in contempt of Congress. On the eve of the vote, June 20, 2012, President Obama declared executive privilege to withhold key documents.

Judicial Watch sued the Justice Department in September 2012 for all of the documents that Obama ordered withheld. It was the first time, and is the only time, the president has exerted executive privilege.

Agent Terry’s family issued a statement today that reads in part, “Holder’s resignation is welcomed by the Terry family and should have occurred immediately after Brian Terry’s death and the revelation that the men that killed Brian were carrying weapons supplied to them by ATF.”

A Justice Department spokesman did not respond to a request for information and comment on Holder’s resignation and accomplishments. In an ABC News report today, a Justice Department official said that, under Holder’s leadership, the department saw “historic gains in the areas of criminal justice reform and civil rights enforcement, particularly on the issues of gay rights, sentencing reform and voting rights.” Among other “key accomplishments,” according to the Justice Department official, are Holder’s declining to defend the Defense of Marriage Act signed by President Clinton and extending federal benefits to same-sex couples.

Responding to news of the resignation, the Republican chairman of the House Oversight Committee, Darrell Issa, R-Calif., called Holder “the most divisive U.S. attorney general in modern history.”

“Time and again, Eric Holder administered justice as the political activist he describes himself as instead of an unbiased law enforcement official,” wrote Issa in a statement. “By needlessly injecting politics into law enforcement, Attorney General Holder’s legacy has eroded more confidence in our legal system than any attorney General before him.” Often cited among Holder’s controversies are his targeting of journalists and federal whistleblowers. Last year, it was revealed that the Justice Department had labeled Fox News reporter James Rosen a “co-conspirator” in one leak investigation and had seized phone records of Associated Press reporters in another.

More than two dozen news organizations signed a letter of objection, prompting Holder to modify Justice Department policies. Additionally, Holder has refused to answer questions first posed by a U.S. senator in July 2013 regarding the unauthorized, remote intrusions of my computers.

Holder also leaves the Justice Department in the middle of its investigation into the IRS’ targeting of conservative and tea party groups. The Justice Department has faced conflict-of-interest allegations because at the same time it is supposed to be independently investigating the IRS, it is also defending the IRS in civil litigation. Holder has said that his agency is impartially investigating the IRS and that no politics are at play.