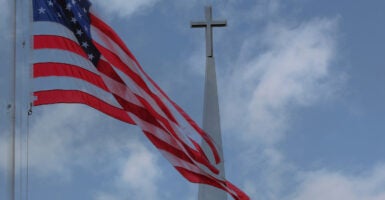 Arkansas voters will get a chance to enshrine religious freedom in the state's constitution following passage by the state's General Assembly of SJR 14. (Photo: Amanda Wayne/iStock/Getty Images Plus)

If you adapted the old advertising slogan for the American company known for its jams, jellies, and preserves, “With a name like Smuckers, it has to be good,” to the American Civil Liberties Union, it might read something like, “If the ACLU labels your action one of the ‘most extreme’ in the nation, it has to be a good idea.”

When the state Legislature of Arkansas recently passed SJR 14, which will provide the voters of Arkansas the opportunity to adopt an amendment to their state constitution to protect religious liberty, the ACLU predictably condemned the measure with its signature hyperbolic flair.

Those who proposed the amendment could not ask for a more ringing endorsement.

Considering the First Amendment to the U.S. Constitution, the federal Religious Freedom Restoration Act, and the state version of the latter in place in Arkansas, some might view a state constitutional amendment as superfluous.

But they would be wrong.

Despite a recent string of victories at the U.S. Supreme Court that primarily protected the rights of the faithful to gather to worship even during a “crisis,” for too many judges and politicians, the First Amendment just isn’t what it used to be.

But how these doctrines protecting religious liberty interact with Title VII are questions for future cases, too.

It wasn’t the first time the court kicked the can down the road in dealing with the implications of its decisions for our first freedom.

In 2015, a so-called conservative court upended a majority of states’ legal definition of marriage and foisted a new one upon the nation with its decision in Obergefell v. Hodges with barely a passing acknowledgement of the Pandora’s box of First Amendment religious liberty crises it had opened.

In his dissent from the high court’s majority opinion in Obergefell, Justice Samuel Alito warned the decision would be used “to vilify Americans who are unwilling to assent to the new orthodoxy.”

Perhaps recognizing how its reasoning may be used, the majority attempts, toward the end of its opinion, to reassure those who oppose same-sex marriage that their rights of conscience will be protected.

We will soon see whether this proves to be true.

I assume that those who cling to old beliefs will be able to whisper their thoughts in the recesses of their homes, but if they repeat those views in public, they will risk being labeled as bigots and treated as such by governments, employers, and schools.

Few at the time understood how quickly his prophetic warning would turn into the radical cancel culture that religious Americans who dare dissent to the new sexual orthodoxy now endure.

But even that’s not enough for the left. To further shame religious Americans, the U.S. House recently passed the so-called Equality Act. Its Orwellian title notwithstanding, this law is in effect a repeal of religious liberty protections found in the federal Religious Freedom Restoration Act, a law labeled “discriminatory” by the same ACLU that wholeheartedly supported its passage in 1993.

The lesson is clear: If the federal legislature can repeal its Religious Freedom Restoration Act, so could a state legislature.

Since the end of the Civil War when the 14th Amendment incorporated the Bill of Rights’ application to the states via the due process clause, the U.S. Constitution has been a floor, rather than a ceiling. In other words, states can enact more protection for their citizens than the U.S. Constitution, but not less.

As traditional religious views on a broad range of issues appear to become increasingly unpopular in America, protection for those who adhere to their beliefs becomes all the more essential.

If there’s a silver lining to be found in this dark moment, it might be a reinvigorated federalism, a reclaiming by the states of their 10th Amendment-protected role, and increased protection for the God-given rights of the people, beginning with religious liberty.

For Arkansas to lead the way on this would do this native son’s heart good. Where better to revive natural law than in the Natural State?