Why America Must Recommit to Religious Freedom 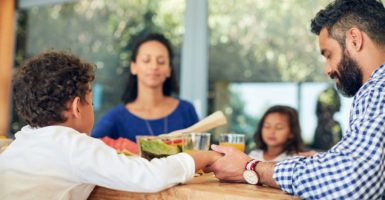 We need to reacquaint ourselves with this fundamental freedom. (Photo: Stock/Getty Images)

We celebrate Thursday, Jan. 16, as Religious Freedom Day, the anniversary of the passage in 1786 of the Virginia Statute for Religious Freedom. Unfortunately, the percentage of Americans who have heard of the law, or the day that commemorates it, is shockingly small.

Yet Thomas Jefferson, who authored the statute in the Virginia Legislature, listed it on his tombstone as one of his three greatest achievements.

We need to reacquaint ourselves with this fundamental freedom.

President George H.W. Bush first declared Jan. 16 to be Religious Freedom Day in 1993, and each president since has issued a proclamation on religious liberty. In his first one, Bush noted that religious freedom is the “first of all freedoms enumerated in our Bill of Rights.”

Bush and his successors as president all said that religious freedom is of the highest importance: “integral to the preservation and development of the United States” (Bush, 1993); a “fundamental human right … without which a democracy cannot survive” (Bill Clinton, 1999); “one of this land’s greatest blessings” (George W. Bush, 2009); a “universal and inalienable right” (Barack Obama, 2017); and “innate to the dignity of every human person” (Donald Trump, 2018).

All of those lofty phrases are true, as far as they go.

In his 2016 proclamation, for example, Obama referred to the “freedom to worship as we choose.” Yet for Americans, religious freedom always has been much broader than that.

From long before America itself was born, this liberty was referred to as the “exercise of religion.” That’s the phrase that America’s founders used in the First Amendment.

In 2018, Trump framed religious freedom better by describing the “right not just to believe as [Americans] see fit, but to freely exercise their religion.” He called it the “right of the individual conscience and religious exercise.”

In doing so, Trump echoed Clinton, who, in 2000, correctly noted that the Virginia Statute for Religious Freedom pledged that no one would “suffer on account of his religious opinions or beliefs.”

Clashes between the constitutional right to exercise religion and civil or statutory rights, such as freedom from discrimination based on controversial new categories, are multiplying all over the country. Politicians and political interests are trying to reduce religious freedom to nothing more than an ordinary value or preference and to confine it to personal religious belief or, at most, to religious worship.

In other words, they want to excise religious exercise from American life. Some take it even further, claiming that Americans who exercise their faith are actually a danger, a negative element that should be minimized or shut down entirely.

In 2018, for example, Sen. Kamala Harris, D-Calif., introduced legislation, the Do No Harm Act, to exempt large categories of laws from the nation’s Religious Freedom Restoration Act.

The Religious Freedom Restoration Act, signed into law in 1993 by Clinton, sets a tough standard for government actions, including legislation, to interfere with the exercise of religion. Sen. Chuck Schumer, D-N.Y., introduced the measure, which the House passed unanimously and the Senate passed 97-3.

By contrast, Harris’ legislation, co-sponsored by 31 other Democrats, would exempt laws that relate directly to liberal constituencies, such as labor unions or abortion providers. Neither Congress nor executive branch agencies would have to consider at all the impact on religious freedom of laws or regulations favoring those political interests.

This is a long way from the deep importance and broad definition that America’s Founders placed on religious freedom. It’s in stark contrast even to the most recent presidents’ rhetoric in their annual Religious Freedom Day proclamations.

As a nation, we are at a crossroads and must decide whether this freedom is what our presidents have said it is and, if so, commit again to actions behind these words.