Cancel Culture Comes for All: How 10-Year-Old Tweets Cost This Journalist Her Job 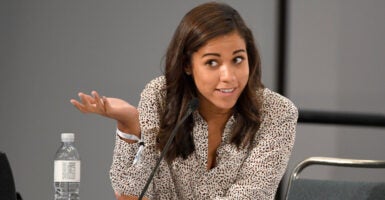 Alexi McCammond, seen here speaking at Politicon 2018 at Los Angeles Convention Center on Oct. 20, 2018, was fired from Teen Vogue magazine when it was revealed that she had made some tweets that many considered anti-Asian and homophobic when she was 17 years old. (Photo: Michael S. Schwartz/Getty Images)

Alexi McCammond, 27, was widely considered an up-and-coming young journalist after her time working as a political commentator for Axios news.

She had been hired as the new editor-in-chief of Teen Vogue magazine and was all set to start, before it was revealed that she had made some tweets that many considered anti-Asian and homophobic when she was 17 years old.

This wasn’t the first time the tweets had come up. In 2019, McCammond publicly acknowledged the tweets and apologized, likely hoping that the act of contrition would protect her from further reputational harm.

Upon hearing McCammond was going to be their new boss, angry members of the Teen Vogue staff demanded blood and called on Teen Vogue’s parent company, Condé Nast, to cut ties with her.

Initially these efforts to have McCammond fired were refused. The tweets were public knowledge when McCammond was hired, and Condé Nast seemed to believe it could weather the storm. McCammond herself apologized again, and for a moment, it almost looked like things would be fine.

Then advertisers started to pull funding.

Faced with a massive internal backlash that was now causing financial harm to the company, it was decided that McCammond and Condé Nast would have to part ways. In a statement tendering her resignation, McCammond wrote:

I became a journalist to help lift up the stories and voices of our most vulnerable communities. As a young woman of color, that’s part of the reason I was so excited to lead the Teen Vogue team in their next chapter. My past tweets have overshadowed the work I’ve done to highlight the people and issues that I care about—issues that Teen Vogue has worked tirelessly to share with the world—and so Condé Nast and I have decided to part ways.

Unfortunately, people losing work at the hands of woke inquisitors is nothing new. But what makes this story unique is that, by most accounts, the mob ate its own this time.

McCammond is not an outspoken conservative, nor does she fall within the usual genre of “problematic” individual. She’s young, black, liberal, and female. She’s written fawning articles praising Rep. Alexandria Ocasio-Cortez, D-N.Y., and is blatantly a leftist. By most metrics, the left should have no problems with her. But here we are.

McCammond’s sole crime against the woke crusade was a handful of offensive tweets from 2011, when she wasn’t even legally an adult.

Out of the numerous faults the woke left has, the complete lack of forgiveness for offense may be its most dangerous. Cancel culture fundamentally preaches that forgiveness impossible, and that neither time nor remorse can ever wipe away the stain of sin.

It didn’t matter how many times McCammond apologized, nor that her offensive tweets are almost a decade old at this point, and almost certainly do not reflect who she is today. The church of wokeism suffers no sinners.

In an ironic and darkly humorous development to the McCammond story, it was revealed that Christine Davitt, a senior social media manager at Teen Vogue and one of the leading voices pushing for McCammond’s ouster, had repeatedly tweeted the N-word almost a decade prior in 2009 and 2010. Will we be hearing calls for her head as well?

There is a monster known as Leviathan that features in several books of the Bible. The beast is described as a massive sea serpent, ever hungry, that devours everything in its path. In many depictions, Leviathan is shown to be eating its own tail.

Cancel culture is the Leviathan of our times, a ravenous beast hellbent on consuming everything before it. Leftists are only now starting to realize that once unleashed, a monster can’t be controlled.

The rules that cancel mobs once gleefully wielded against their foes are now being turned on them. When a life can be ruined over decades old offenses, no one is safe.

When Leviathan gets hungry, who will be next?