Noam Chomsky, J.K. Rowling, and Dozens More Attacked for Calling for an End to Cancel Culture 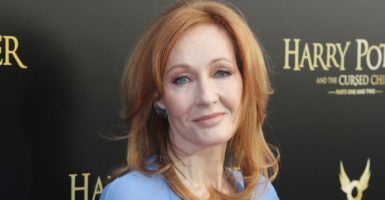 Over 100 writers, scholars, journalists, and academics, including “Harry Potter” series author J.K. Rowling, have signed a letter that calls for the “free exchange of information and ideas.” Pictured: Rowling poses at the "Harry Potter and the Cursed Child, Parts 1 & 2" on Broadway opening night April 22, 2018, in New York City. (Photo: Bruce Glikas/FilmMagic/Getty Images)

Some journalists berated high-profile figures, including “Harry Potter” series author J.K. Rowling, who signed a Tuesday letter calling for an end to the “stifling atmosphere” of shaming writers for expressing views outside the mainstream.

Over 100 writers, scholars, journalists, and academics, including writers Noam Chomsky, Rowling, and Bari Weiss signed “A Letter on Justice and Open Debate” that called for the “free exchange of information and ideas.”

The letter comes on the heels of massive social media outrage over Rowling’s defense of the concept of biological sex.

“As writers we need a culture that leaves us room for experimentation, risk taking, and even mistakes,” the letter said. “We need to preserve the possibility of good-faith disagreement without dire professional consequences. If we won’t defend the very thing on which our work depends, we shouldn’t expect the public or the state to defend it for us.”

The authors point out that the “reckoning” brought about by protests and calls for justice and equality has “intensified a new set of moral attitudes and political commitments that tend to weaken our norms of open debate and toleration of differences in favor of ideological conformity.”

“As we applaud the first development, we also raise our voices against the second,” the letter said. “The forces of illiberalism are gaining strength throughout the world and have a powerful ally in Donald Trump, who represents a real threat to democracy.”

They continued: “But resistance must not be allowed to harden into its own brand of dogma or coercion—which right-wing demagogues are already exploiting. The democratic inclusion we want can be achieved only if we speak out against the intolerant climate that has set in on all sides.”

Many journalists and media figures responded to the letter with derision, singling out those who had signed. The Columbia Journalism Review’s Mathew Ingram called some of the signers “aging wankers” and “thin-skinned right-wing attention hogs.”

“I see only a collection of spineless liberals who never spoke out when cancel culture came for conservatives but now express concern when it’s affecting the intelligentsia,” said Human Events editor Ian Miles Cheong. “And how do they respond? With mild chiding, as if the far left are children to be scolded.”

Hilariously ridiculous. And several people on there who have tried to cancel me personally. The weakness of liberalism is totally out in the open.

Writer Judd Legume tweeted: “This letter perfectly illustrates my issue with the ‘cancel culture’ trope. The signatories of this letter have bigger platforms and more resources than most other humans. They are not being silenced in any way.”

Not only does this letter fail to provide any evidence for its dire warnings implying the left is intolerant, but it echoes Trump’s Mt Rushmore speech, which warned that “cancel culture” is one of the biggest threats to the country. A shame to see some good people sign this crap. https://t.co/AiGPSQ4DyB

“Think about how many of these clowns’ net worth is over $1 million,” tweeted The Nation’s Wilfred Chan. Media Matters editor-at-large Parker Molloy retweeted that statement with the comment, “And not a single one of them have been censored anytime in recent history.”

They don’t care about “debate” or “an open exchange of ideas” or anything like that. They just want to reinforce their position as the deciders of what perspective the world should hear from.

They want to reinforce their monopoly on public discourse.

Molloy criticized the signers of the letter of doing what they said they opposed: attempting to silence those who disagreed.

“Their letter isn’t a call for debate, it’s a call for silence,” Molloy noted. “The people who signed that letter aren’t advocates for ‘free speech.’ In reality, they’re the worst kind of censor of all.”